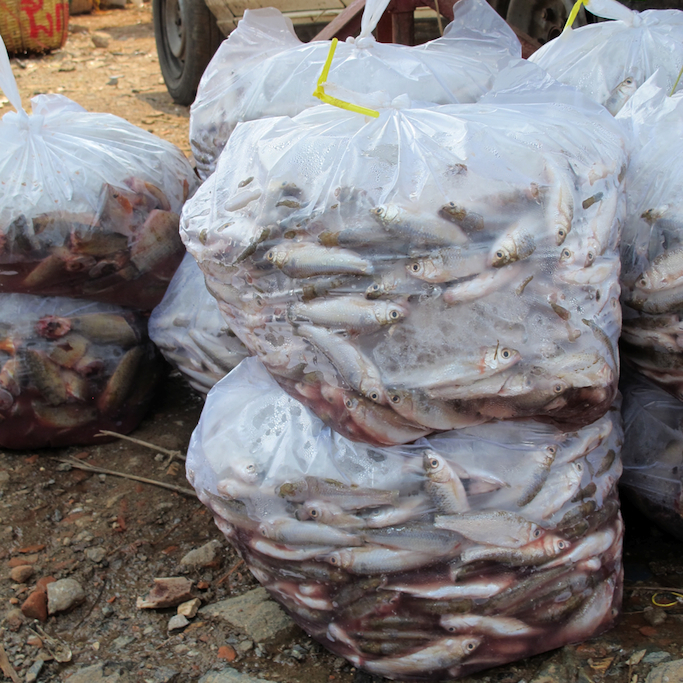 In Cambodia’s Tonle Sap Lake, daily life revolves around fish and water. During the monsoon season, the Tonle Sap River rises and floods the forests around the lake. Many trees and shrubs on these floodplains are deciduous: they shed their leaves when submerged, then re-grow them along with fruit and seeds as the water subsides (Campbell et al. 2006). Flooded forest habitats support fishes in many ways: for example, the leaves, flowers, and fruit of flooded plants are known to be an important source of food for fish in similar habitat in northern Cambodia (Baird 2007). In turn, fishes are vital to the people who live on or near the lake, supplying 80 percent of the animal protein in the diet of Tonle Sap residents.

Fish are so important in Cambodia that some even believe the national currency (riel) is named after a fish, trey riel, also called “money fish.” It is these small, silvery fishes from the genus Henicorhynchus (shown above) that make up an integral part of the Tonle Sap ecosystem and fishery. Money fish are usually processed into prahok, a fermented, protein-rich fish paste that is essential to Cambodian cuisine, and similar to Lao padek. Despite the bumper catch of trey riel reported this past fishing season, there are concerns regarding the sustainability of the Tonle Sap fishery. Residents report that a growing number of people are fishing in the lake, and the flooded forest habitat that the fishes depend on is being cleared for agriculture. Furthermore, dams under construction up in the Mekong River basin may impact the hydrology of the lake.

Trey riel are highly migratory, and when the water level of the lake falls at the end of the rainy season, the money fish migrate out through the Tonle Sap River. They are then believed to travel up the Mekong River as far north as the border with Laos. Recent genetic analysis of one species found that Henicorhynchus siamensis below the Khone Falls, Lao PDR, constituted a single large “Mekong Delta” stock of related fish, indicating that trey riel likely do migrate from Cambodia to Vietnam and southern Laos (Adamson et al. 2009). For now, this “money” really does grow on floodplain trees, but the careful coordinated management of several natural resources is needed to sustain this national treasure.