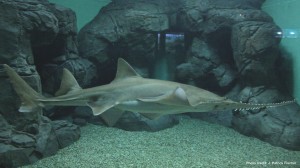 When people think of sharks and their relatives, the threat of attack from a menacing White Shark (Carcharodon carcharias) is often first to come to mind. But it turns out the actions of humans pose a much bigger threat to this diverse group of fishes than the fish do to us. A recent scientific article published in the journal eLIFE estimates that one out of every four chondrichthyan fish species (i.e., sharks, rays, and chimaeras) are threatened with extinction due to overfishing – a risk much higher than that of most other vertebrates (Dulvy et al. 2014). Sharks and their relatives tend to be more sensitive to overfishing than other fishes due to slower growth, slower reproduction and later maturation. This paper represents the first systematic analysis of threats to chondrichthyans, and it drew on two decades of assessment work conducted by more than 300 people on 1,041 species (33 freshwater and 1,008 marine/euryhaline). Based on the Red List Criteria of the International Union for the Conservation of Nature (IUCN) used for the assessments, the study also found that more than one third (36.0%) of the 90 euryhaline (tolerant of a wide range of salinities) and obligate freshwater chondrichthyans are threatened due to the combined effects of overexploitation and habitat degradation.

Two Mekong River species are included in the top ten most threatened families of chondrichthyans (i.e., the sawfishes and whiptail stingrays). The Largetooth Sawfish, Pristis pristis (shown above, formerly called P. microdon), is listed as Critically Endangered and was historically documented in the Mekong River downstream of the Khone Falls. However, it is now extremely rare, if not locally extinct. This sawfish can grow up to 21 feet in length (650 cm is the largest reported total length), and its large size, toothed snout, and use of shallow habitat make it highly susceptible to accidental or intentional capture in fishing nets.

The second species, the Mekong Freshwater Stingray (Dasyatis laosensis), is listed as Endangered and lives in Laos, Thailand and Cambodia. Although the Mekong Freshwater Stingray is not usually targeted intentionally in commercial or subsistence fisheries, it is sold or consumed when it is caught. IUCN reports that the population has declined by at least 50% over the last 20 years, based on occurrences in market surveys and local ecological knowledge, with the decline expected to continue. The Lao government listed the species under Category I for protected fish, which means fishing for it is banned. The study authors noted that many freshwater species suffer multiple threats, and listed D. laosensis among eight freshwater chondrichthyans threatened by water control and river development. One interesting finding of the study is that rays are more highly threatened than sharks, despite a growing interest in shark conservation. With ray conservation lagging behind, management actions are urgently needed to prevent further population declines. FISHBIO is currently working in the Mekong Basin to collect data to inform conservation of rare and endangered fishes, including freshwater stingrays, by engaging local people in conservation research and sustainable management.