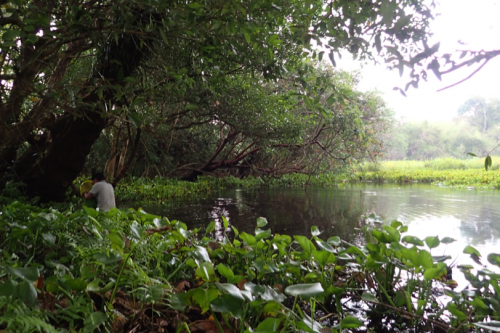 The Sustainable Mekong Research Network (SUMERNET) celebrated its 10th birthday in January with a daylong meeting that brought together donors, policy makers, stakeholders, and research partners in Bangkok, Thailand. The network aims to support credible, collaborative research and bridge the gap between science and policy. The theme of the meeting was “Stories of Change from the Mekong Region,” and FISHBIO was invited to attend because we are a partner on a SUMERNET-funded project investigating ecosystem services provided by small wetlands in dry forests. Dr. Chayanis Krittasudthacheewa, the SUMERNET Program Manager, opened the meeting by reflecting on the first three phases of the network’s development and introduced several stories of changes experienced by research teams over the past 10 years of SUMERNET projects.

Several highlighted stories emphasized the impact that SUMERNET has made on sustainable development in the Mekong Region, including a project that spanned four countries and classified contract farming systems, in which the farmers have agreements worked out with buyers. A policy brief written for this project received surprising interest from the private sector, and companies in Myanmar that participated in the research have adopted new practices that benefit the contract farmers. This study is a great example of collaboration and research influencing policy decisions. Many other motivating stories of change can be found in SUMERNET’s anniversary booklet. 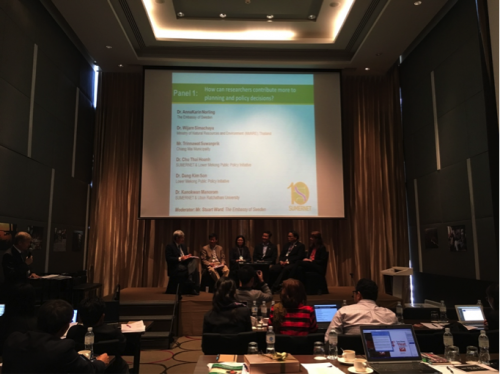 The afternoon session of the workshop included several interesting panel discussions on topics ranging from the recent drought to how researchers can contribute to policy decisions. Shaara Ainsley from FISHBIO represented the small wetlands project, and was a panelist for a discussion on the topic of “The values of conserving and restoring wetland services.” During the panel, Dr. Robert Mather of the IUCN Asia Regional Office explained that ‘wetlands’ is a term used to describe numerous, diverse ecosystems, and that these wetlands are valued by people in many different ways. Other panel speakers described wetlands as socio-ecological systems that offer multiple services and goods, including food, medicine, nutrient replenishment, cultural sites, flood protection and more.

However, wetlands are being lost at a rapid rate in Southeast Asia, and this loss will impact the livelihoods of many people. In some cases, the value of wetlands may not be easily explained or recognized by the communities living around the wetlands because they are so essential and ingrained in everyday life. For example, Dr. Carl Middleton of Chulalongkorn University described a case study in Myanmar where the communities in a wetland area were conducting a community impact assessment, and they were having difficulty articulating the value of the wetlands to their culture. The community recognized they were able to explain how festivals in their village related to the wetlands, and could use this connection to better communicate this ecosystem service during discussions about potential development on the wetlands. Dr. Middleton reasoned that “recovering wetlands means recovering livelihoods” by providing socio-ecological resilience for communities. Dr. Mather’s closing remarks were a call to action: wetlands are being lost, so what are we going to do about it? We hope that projects like the ones highlighted at this workshop will contribute to solutions for ongoing regional wetlands challenges.