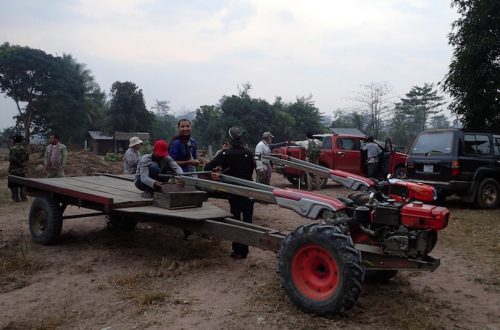 It has been nearly a year and a half since FISHBIO began working on a collaborative project surveying small wetlands in Cambodia and Vietnam, and we have explored some interesting, out-of-the-way places in the process. The project has focused on Yok Don National Park in the Central Highlands of Vietnam, and Kulen Promtep Wildlife Sanctuary in Northern Cambodia, which are both protected areas with dry dipterocarp forest habitat. In January, the project team sampled in Kulen Promtep Wildlife Sanctuary. Researchers traveled from Vietnam, Cambodia, and the U.S. to meet at the sanctuary, and we were joined by a film crew from the Sustainable Mekong Research Network (SUMERNET) based in Thailand. Our short video gives a taste of the variety of surveys included in this project, including studies of soil, plants, birds, and fish. During projects like these, just getting to the study site is the adventure.

The area we were surveying was about 3 hours northeast from Siem Reap by car. There were no markets in the small villages where we stayed, so we stopped along the way to stock up on the essentials, such as beef, dried fish, eggs, cucumbers, lettuce, instant noodles, and herbs. Inside Kulen Promtep Wildlife Sanctuary, the roads are dusty and rutted single-lane paths, and in some places we crawled along with bushes scraping the sides of the trucks. We were in luck this trip, and there was very little rain (it was the dry season after all). Even so, when it rains in Cambodia it pours, and the roads become muddy streams. Once in the villages we found it was much easier to get around to our field sites by hiring the local tractors (although you do have to give up the comforts of a padded seat and air-conditioning). The drivers from the villages knew the forests like the back of their hand. In search of our next wetlands, we would plow off the dusty tracks into the bushes and find ourselves right where we needed to be – off the beaten path.