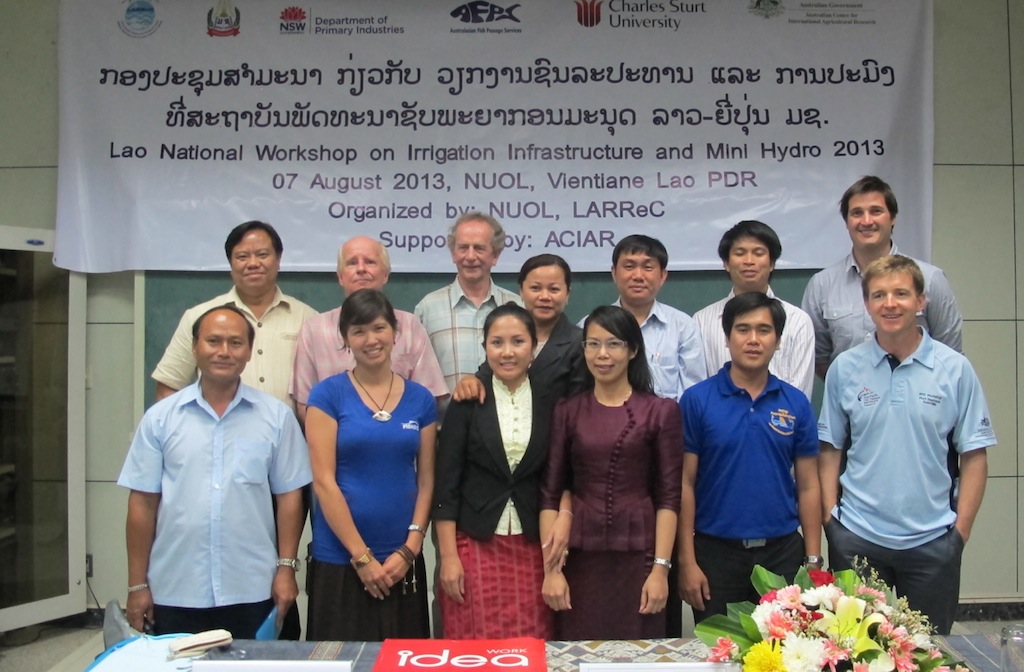 Scientific research can inform the best designs and strategies to help fish move past migration barriers, such as dams, weirs, and road crossings. That was the take-home message of the Lao National Workshop on Fish Passage recently held in Vientiane, Lao People’s Democratic Republic. Experts from Lao PDR, Australia, Brazil, France, and the United States shared experiences addressing fish passage in their respective countries. Speakers stressed that fish passageways in Lao PDR need to be designed specifically for the native species of the region, which may require different approaches than those that have worked elsewhere. A particular challenge to fish passage design in a region with as much biodiversity as the Mekong is accommodating the wide variation in sizes and swimming abilities of fish species that range from 3 cm to 3 m in length.

The conference focused primarily on floodplain barriers, which block fish from moving laterally off the main river into the tributaries and wetlands of the watershed. The first day of the workshop focused on helping fish traveling upstream, which may be breeding adults trying to migrate to their spawning grounds, or juveniles accessing nursery habitat. Researchers presented methods for prioritizing existing structures that need modification for fish passage — a necessary exercise, since they identified nearly 2,500 potential barriers in a single river catchment (Xe Chamopone). Such barriers can be roads, irrigation structures, or natural obstructions like logs. Scientists also described an experiment to test various fish passage designs at a floodplain regulator in the Pak Peung wetland of Central Lao PDR (Baumgartner 2012). Unlike salmon, which can leap over barriers 2 m high, Mekong fish in the 3-60 cm size range could generally clear a step that is 10 cm tall (4 in), the researchers found during laboratory studies. Based on these findings, they constructed a fishway with 43 sequential 10-cm steps, which stretched 150 m (492 ft) in length. Because fish passageways can’t be too steep, the taller a barrier is, the longer a fishway needs to be to clear it, and hence the more expensive it is to construct and maintain.

The second day of the conference focused on creating passage for downstream migrating fish, which can be either adults or juveniles travelling from floodplains to the mainstem river. Several researchers discussed the potentially hazardous hydraulic conditions fish may encounter when passing through structures, including pressure changes, shear between two shifting masses of water, and collision with hard surfaces. Researchers indicated that structures requiring water and fish to pass underneath a barrier (such as a sluice gate) proved more damaging to fish than those allowing fish to pass over the top of a structure (such as a fixed crest weir). Scientists also used a pressure chamber to demonstrate the barotrauma, or physical injury from changes in pressure, that fish experience when passing through turbines and weirs: as the pressure drops, the gasses inside a fish expand. Participants discussed plans to build fish swimming and testing facilities at the National University of Laos so more fish passage experiments can be conducted on a greater variety of local species. The workshop highlighted many successes in helping fish move across floodplain barriers, which are generally 6 m (20 ft.) or shorter. A number of additional factors will need to be considered when designing and evaluating fish passage at larger barriers.