At the recent American Fisheries Society annual meeting in Portland, Oregon, U.S.A., a full-day symposium titled “Sustaining Diverse Fisheries in the Mekong Basin” brought together researchers from around the world who are working on fisheries issues relevant to the Mekong Basin. Many of the symposium presentations are now available to view online on the Mekong Fish Network Slideshare page. The morning session began with a talk by So Nam (Mekong River Commission) who described the importance of wild capture fisheries to the economics and human health in the Lower Mekong River Basin. Vu An (Research Institute for Aquaculture 2 in Vietnam) followed with a description of the challenges facing inland fisheries in the region and the numerous factors affecting fish populations (e.g. pollution, habitat loss, sediment mining, hydrological changes, irrigation, illegal fishing gears, hydropower, etc.). Douangkham Singhanouvong (Living Aquatic Resources Research Centre, Lao PDR) presented an example of ongoing fisheries monitoring at lee traps in Laos, and Kai Lorenzen (University of Florida) described some unexpected outcomes of fisheries management methods tested in human dominated wetlands in the basin. Thomas Pool (University of Washington) described the trophic plasticity of fishes in the Tonle Sap Lake in Cambodia, where fish consume a broad range of prey from diverse habitats, especially during the wet season when inundation is greatest. This research indicates that the expected changes in the length of floodplain inundation as a result of climate change and hydropower development will likely alter food availability for fishes.

The morning session continued with a series of talks on lessons learned from hydropower development in Brazil, the U.S. and Thailand. Luiz Silva (Universidade Federal de São João del‑Rei; UFSJ) described some lessons learned from the conservation and management of fish in tropical rivers in Brazil, especially the importance of understanding fish migration, spawning habitats and nursery habitats to improve decision making in hydropower planning. Tuantong Jutagate (Ubon Ratchathani University, Thailand) compared fish assemblages in dammed and intact tributaries in the Mekong basin and found that a river blocked by a series of low-head dams had a stable adult fish assemblage year round and the larval fish were dominated by non-migratory species. In contrast, rivers with occasional or complete connectivity exhibited seasonal shifts in the adult fish assemblage, and the larval assemblage contained more migratory fish. David Hand (U.S. Fish and Wildlife Service) provided an overview of the history of dams in the Columbia River basin in the U.S., and described how some of the fish passage challenges may be applicable to the Mekong River basin (e.g., development of measurable objectives and adaptive management, significant long-term commitment and costs, institutional changes in thinking about the system). 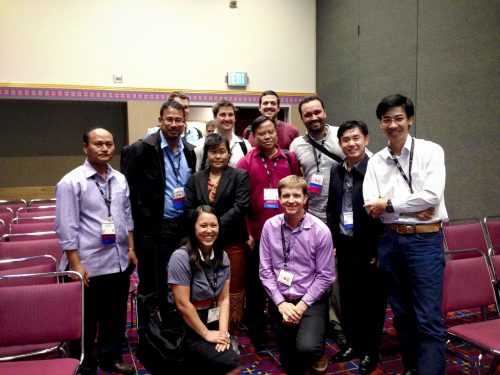 Presentations by Khampheng Homsombath (Living Aquatic Resources Research Centre, Lao PDR) and Craig Boys (New South Wales Department of Primary Industries) described various aspects of research being conducted at a fish passage site at Pak Peung Wetland in Lao PDR, where over 100 species of fish have been recorded moving through the fishway since it was commissioned in 2014. Tim Marsden (Australiasian Fish Passage Services) described the key factors for prioritizing barriers to fish passage in Laos, including the location in the catchment, stream type, habitat availability upstream, estimated cost, and intensity of land use. Stephan Schmutz (Institute of Hydrobiology and Aquatic Ecosystem Management) explained the challenges of designing effective fish passage in the Mekong Basin, where passage needs to be provided year-round for a diversity of fishes and at highly variable water levels. In his presentation, he encouraged innovation, stating that current technologies alone cannot solve the fish passage challenges on the Mekong River. 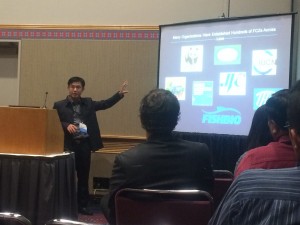 Several researchers in the symposium presented on new innovative technologies that are being used to investigate fish migration and fish passage. Symposium co-chair Lee Baumgartner presented on behalf of George Naughton (University of Idaho) on an acoustic telemetry pilot study conducted in the Mekong basin that highlighted the need for additional data on complex fish migrations. Jayson Martinez (Pacific Northwest National Laboratory; PNNL) described a new small injectable acoustic transmitter that could be used for studies of migration and fish passage in the Mekong. Presentations by Jun Lu and Allison Colotelo (PNNL) described a new tool called the Sensor Fish that was developed to understand physical conditions that fish are exposed to when passing through dams, and will be used to test different designs at irrigation structures in Laos. Bernardo Beirao (UFSJ) followed this by presenting a new approach to evaluating the susceptibility of fish to barotrauma based on their swim bladder structure. The session ended with presentations by Sinsamout Ounboundisane (FISHBIO) and Dr. Oudom Phonekhampheng (National University of Laos) who presented on the value of creating fish conservation zones (no take areas) near critical habitats or near structures such as weirs and ladders, where fish are susceptible to overfishing. These last two presentations stressed the value of involving the local communities in fisheries research and management, thus bringing the talks full circle back to the importance of fisheries to the health and wellbeing of the people of the lower Mekong Basin. It was exciting to see the range of research being conducted in the basin, and hopefully the discussions and ideas generated at this symposium will