It may seem surprising that an interdisciplinary group of researchers spent a week in a Vietnam forest looking for fishes in dry wetlands, but the lack of water was part of the point. We wanted to know which fish could survive Southeast Asia’s dry season in this kind of extreme habitat. Our team of researchers and graduates students from Vietnam, Cambodia, and Laos heave teamed up to investigate the value of ecosystem services provided by small wetlands in dry open forests. With funding from the SUMERNET program, this project seeks to answer questions about small, seasonal wetlands in hopes of informing management and development decisions.

In May and June, our team conducted the first of three surveys of small wetlands in Yok Don National Park in the Central Highlands of Vietnam, and Kulen Promtep Wildlife Sanctuary in Northern Cambodia. The study focuses on wetlands in dry dipterocarp forests, where deciduous hardwood trees from the Dipterocarpaceae family drop their leaves in the dry season. Unlike the deciduous forests of New England in the United States, these trees lose their leaves not in response to cold, but to limited water. This kind of ecosystem can be found across Cambodia, Central Vietnam and Southern Laos, and the wetlands in dry dipterocarp forests usually expand then dry up with the changing seasons. This survey provided an opportunity to sample during the transition period between dry and wet seasons, after initial rains have started to fill pools in the wetlands, and plants and frogs are beginning to emerge. It was hard to believe that just a few weeks before we arrived, the lush green forest we walked through had been a dry, brown grassland where the trees had no leaves. This dynamic ecosystem experiences an explosion of growth in a relatively short time frame. 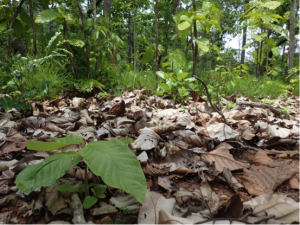 The team surveyed birds, fishes, plants and amphibians to document their diversity. FISHBIO is working with a graduate student from Cambodia to survey for fishes, which at this time of year is like looking for a needle in a haystack. Many of these wetlands dry out completely during the dry season (November to May), and fish retreat to nearby streams and rivers. Our next sampling trip will occur during the rainy season, when we expect to find many fish species using the flooded wetlands for foraging and spawning. However, during the transition from the dry to rainy seasons, fish were few and far between, and flowering plants and amphibians took the spotlight. We were able to collect an occasional fish in deeper pools that had retained water over the dry season, including snakehead (Channa striata), gouramis (Trichopodus trichopterus), climbing perch (Anabas testudineus), and bright minnows from the genus Rasbora. Encountering these species in less-than-ideal habitats was not surprising, since these hardy fishes are known to occupy relatively stagnant marshes and ponds. Although the scarcity of fish often made for slow days of sampling (especially when we arrived at wetlands with no water in sight), it will be all the more exciting to return in October and find a watery wetland teeming with fishes. Find more photos of the project on Flickr.