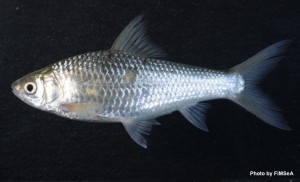 When researchers want to understand where a fish spends its time, they often use tagging techniques to track the fish’s movements, like a detective tailing a suspect in real time. However, another method to track a fish’s whereabouts involves using its ear bones to retrace its movements long after the fact. Otoliths are the ear bones located in the head of most bony fishes, and they provide useful records of a fish’s history. These structures accrete layers of minerals daily, like rings on a tree trunk, which can be used to estimate the age of the fish or to investigate the history of the water chemistry the fish experienced. As otoliths grow, they take up elements, such as strontium and barium, present in the ambient water. This means different layers of an otolith can have differing compositions of elements that reflect the surrounding water. If the geology of the region where a fish lives creates differences in water chemistry among locations, the otolith’s microchemistry (ratios of particular elements) can be used as tracers to determine where a fish was born (its natal origin), and where and when the fish spent time throughout its life.

Researchers are just beginning to apply otolith microchemistry techniques to understand the movements of fishes in the Mekong River basin. This is an ideal tool for the region because otoliths can help recreate large-scale movements of fish without the logistical challenges of tagging and tracking the fish itself. Previously, otolith microchemistry work from the Mekong Basin found that a species of large-bodied catfish (Pangasius krempfi) travels more than 700 km along the Mekong River between the Mekong Delta in Vietnam and the Khone Falls region near Lao PDR’s border with Cambodia (Hogan et al. 2007). A recent study published in the journal PLOS One (Fukushima et al. 2014) investigated the migration of Siamese mud carp (Henicorhynchus siamensis and H. lobatus), an abundant and economically important type of fish in the Mekong basin. By analyzing the microchemistry of otoliths collected from Thailand, Laos and Cambodia, the researchers were able to identify natal origins and synchronized migrations (occurring at the same time of year) in individuals collected from the same region. 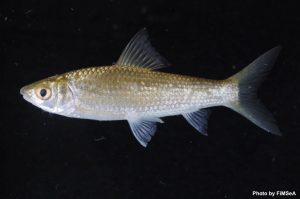 The researchers found that the otoliths of H. lobatus collected above and below Khone Falls had similar elemental composition in the otolith’s core (indicating fish were born in the same region), and showed the fish took similar migration pathways. However, the surface of the otoliths, which reflects the fish’s most recent travels, showed differences in elemental composition, indicating the fish’s migration pathways ended in different locations. The authors suggest the findings indicate some of these H. lobatus move past the falls, which present a natural barrier for many fish species, while others remain below the falls.

The scientists also looked at otoliths of H. siamensis in the Gam Basin in Thailand, collected in between five irrigation dams, and found these fish showed limited movement, despite the existence of fish ladders designed to facilitate fish migrations. The elemental composition of otoliths from Gam Basin fish showed these fish’s otoliths were quite similar to each other, but showed large differences in otolith microchemistry compared to fish from other regions, including the Mekong River mainstream in southern Laos and Cambodia. This indicates the fish did not travel extensively, and their migrations were likely impeded by the irrigation dams. In contrast, elemental composition of otoliths of H. siamensis from the Mun River in Thailand indicates migration between the Mun and Mekong mainstream in southern Laos and Cambodia. The Pak Mun Dam, about 6 km upstream of the confluence with the Mekong, operates with open sluice gates during the rainy season to allow fish passage, and this study suggests this practice may indeed facilitate migration of some H. siamensis. The results of this work demonstrate the importance of understanding the migration pathways of ecologically and economically important fish species, such as the Siamese mud carp, when considering the impacts of water development in the Mekong River basin.