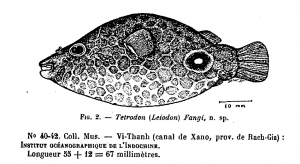 The study of fish in the Mekong Basin is an endeavor that stretches back more than 100 years. Dr. Vu Ngoc Ut of Can Tho University in Can Tho, Vietnam, uncovered several historical publications documenting early scientific encounters of fishes in southern Vietnam and Cambodia. He shared the documents, which were written in French, with colleagues at the United States Geologic Survey (USGS). Kathryn Spear of the USGS National Wetlands Research Center in Lafayette, Louisiana, undertook the task of translating these technical documents into English.

The three translated documents are now all available to download on the MFN Featured Publications page. They include:

These articles span a time period of more than 60 years, from 1877, when France’s conquest of Vietnam was well underway, to 1940, during the beginning of World War II. Vietnam and Cambodia officially became part of French Indochina in 1887. Vietnam was grouped into three regions: Tonkin (north), Annam (center), and Cochinchina (south). Laos became part of French Indochina in 1893. Vietnam declared its independence after the completion of World War II, although France continued to rule until defeated by communist forces in 1954. Cambodia and Laos gained independence in 1953. By 1954, French Indochina had come to an end.

The Mekong Delta lies in the former Cochinchina region, which is the region most frequently mentioned in the following articles. These regional names have been kept in the text. For other geographic locations that have since undergone name changes, such as Saigon, we have kept the original name in the text but followed it with the current proper name in italicized brackets, such as “Saigon [Ho Chi Minh City].” Translations for frequently used Vietnamese terms and scientific names that vary between French and English are provided where available, but in most instances, we have left them in their original form.

Thank you to John Beeman and Cyndhia Ramatchandirane for their thorough review of these translations and to Matthew Andersen for his support and coordination of this endeavor.

We hope these manuscripts may provide a valuable resource for investigating historic trends in Mekong fishes.