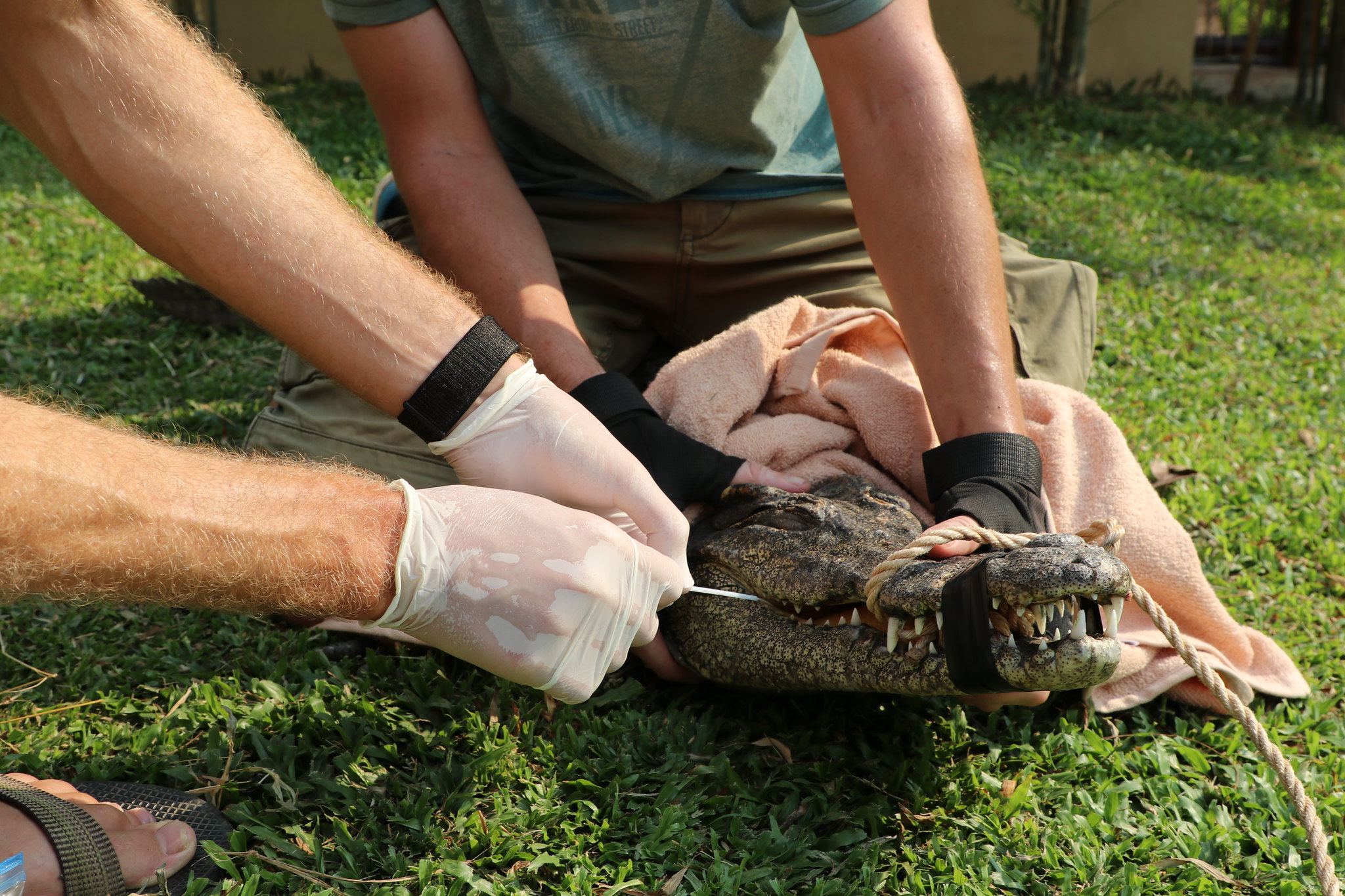 Crocodiles are experts at remaining hidden, which makes monitoring their populations a difficult task. Biologists often have to rely on signs like tracks and scat to determine if crocs are in an area, but even these clues can be challenging to find or definitively identify. Recently, scientists tested the ability to detect another telltale form of crocodile evidence: their DNA. Environmental DNA (eDNA) is becoming an increasingly common way to monitor aquatic animals, and its utility isn’t limited to just fish. Terrestrial and semi-aquatic animals also shed their DNA into waterways that they live in or near, and this DNA can be used to detect their presence. To evaluate the feasibility of eDNA for monitoring rare Siamese Crocodiles (Crocodylus siamensis) in Cambodia, FISHBIO scientists worked in collaboration with the Wonders of the Mekong Project, Rising Phoenix, Fauna and Flora International (FFI), and Jonah Ventures to collect eDNA samples from waterways throughout the Siem Pang Wildlife Sanctuary and to test the effectiveness of eDNA methods at a site where Siamese Crocodiles have recently been reintroduced. 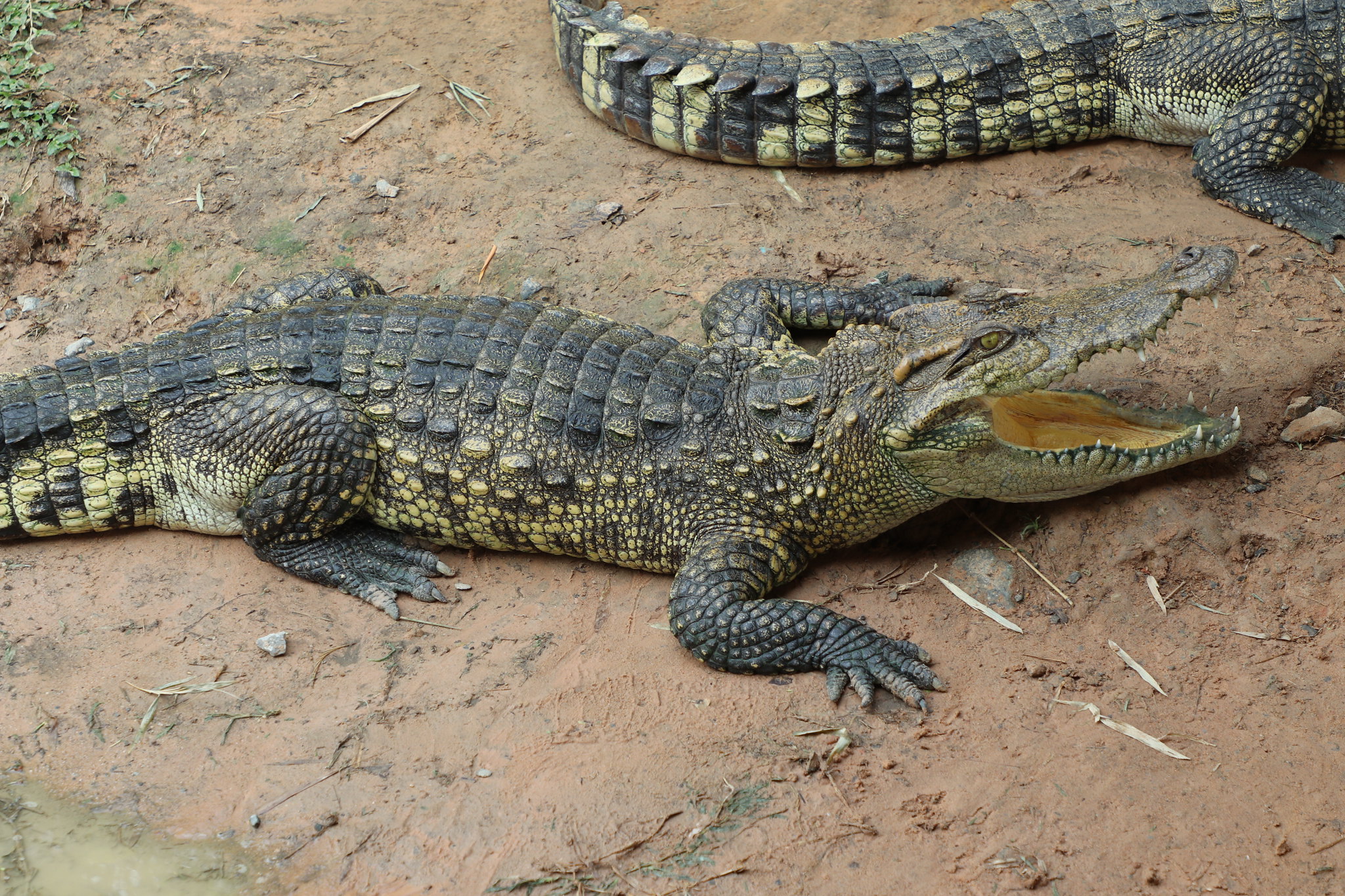 Siem Pang Wildlife Sanctuary is a protected area that encompasses more than 500 square miles in northeastern Cambodia. This forested landscape is home to many rare species, including Gaur (Bos gaurus), Banteng (Bos javanicus), and critically endangered Giant Ibis (Thaumatibis gigantea). Historically, the wetland pools and streams of this region were also home to another critically endangered species, the Siamese Crocodile. Over the twentieth century, crocodile populations dwindled due to hunting and human disturbance, and by the 1990s they were believed to be extinct in the wild. It wasn’t until the year 2000 that Siamese Crocodiles were confirmed to have persisted in Cambodia. However, surveys from 2000–2014 indicated that 90% of the remaining crocodiles were confined to the Cardamom Mountains of southwestern Cambodia, and only sporadic confirmed sightings occurred in the Siem Pang region. As of 2022, some researchers believe that crocodiles have been locally extirpated from Siem Pang, although surveys in the region by FFI detected potential crocodile tracks in 2021, and in that same year local fishers reported having sighted what they believed to be a crocodile.

FFI led the effort to establish a Siamese Crocodile reintroduction program in Cambodia, and recently completed their largest release of captive-reared Siamese Crocodiles into the wild. Simultaneously, FFI has been working with the UK-based laboratory NatureMetrics to develop eDNA methodology for the detection of Siamese Crocodiles, and they have been implementing eDNA sampling in their release sites. In an effort to expand reintroduction, FFI has shared their expertise and experience with other organizations also working to conserve the species. One of these organizations is Rising Phoenix, which recently received funding through the Critical Ecosystem Partnership Fund to carry out a Siamese Crocodile reintroduction effort in Siem Pang. As of this March, their team has released 15 Siamese Crocodiles into a “soft-release” enclosure in a wetland pool known as Boueng Nava. This release enclosure (shown in the photo below) is intended to contain the crocodiles for the remainder of the dry season, and help them to acclimate to the new habitat before rising water levels in the wet season will allow them to disperse from the pond. 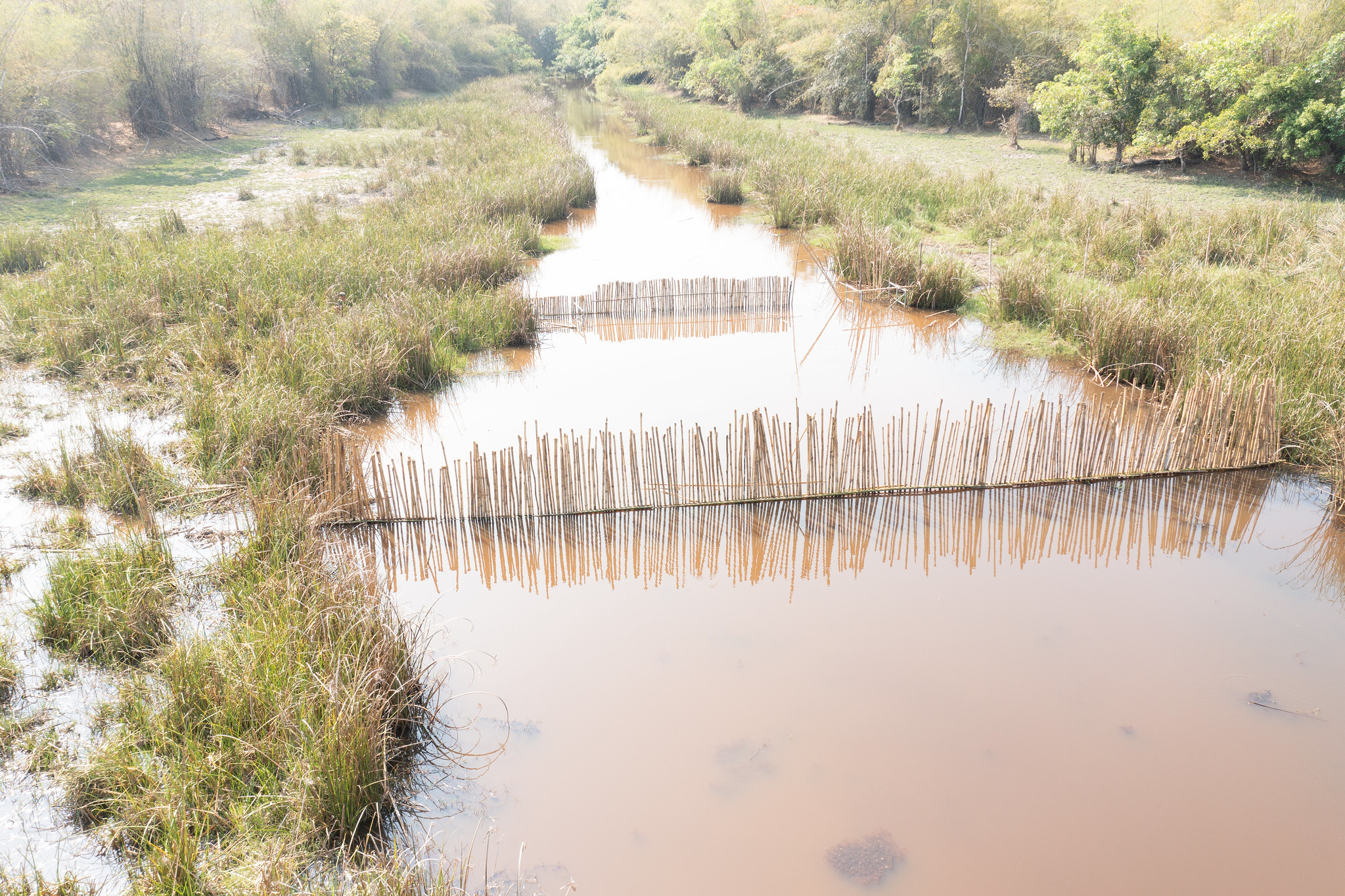 In an effort funded by the Wonders of the Mekong Project, FISHBIO collaborated with the Rising Phoenix ranger team to collect water samples to filter for eDNA from locations throughout the Siem Pang Wildlife Sanctuary where extant crocodile populations may have persisted, as well as from the release site. The goal of collecting samples from the release site at varying distances from the enclosure and over an extended period of time was to evaluate the likelihood of crocodile eDNA detection. The collected samples recently underwent analysis at the Jonah Ventures eDNA laboratory, and initial results indicate that more work is needed to understand the utility of eDNA for Siamese crocodile monitoring. Although the genetic primers effectively detected known DNA samples collected from captive Siamese crocodiles (positive controls), none of the environmental samples collected from the wild or from the release enclosure resulted in detection of crocodile eDNA. This may be due to the species’ keratinized scales or infrequent defecation, which consequently lead to very low DNA shedding rates of crocodiles, a challenge that has been noted in eDNA studies of other crocodilian species.

The results of this study may mean that effective eDNA monitoring of Siamese crocodiles will require filtering much larger volumes of water in order to detect their faint DNA signal. However, in addition to learning about the effectiveness of eDNA for crocodile monitoring, this project has focused on training local rangers in how to conduct low cost, low effort eDNA sampling. Improving local capacity in this way has the potential to help facilitate community-led long-term monitoring programs of many aquatic and semi-aquatic species. This is of particular value in a post-pandemic world, as the capacity of community members and local NGO staff to collect eDNA samples will allow for simple remote coordination of both targeted sampling and long-term monitoring efforts.