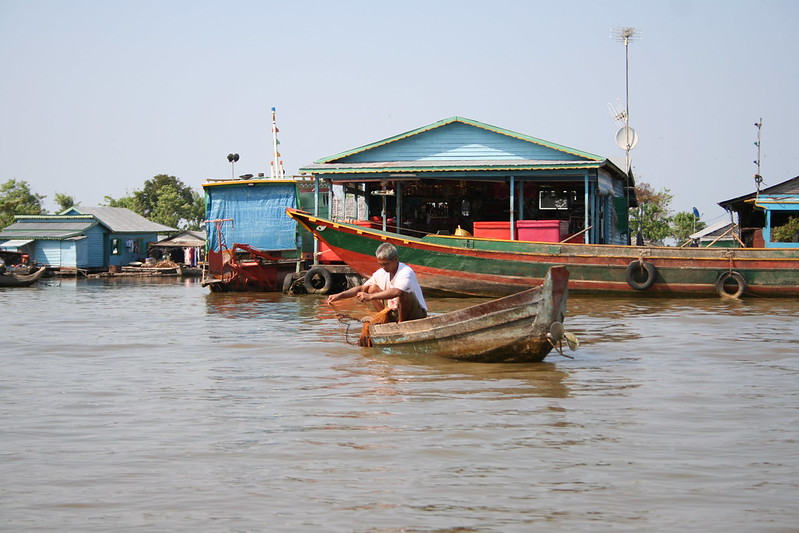 Approaches to resource management aren’t “one size fits all,” especially when taking into account the diverse environmental, social, technological, political, and economic factors that shape an area. A growing collection of research suggests that the most successful resource management systems are those that have been created locally and consider the unique local context. Tonle Sap Lake is an essential inland fishing resource in Cambodia, and historically operated under a system of privately owned and managed sections of the lake called fishing lots. Due to a myriad of stressors – namely overfishing, dam construction, and the destructive logging of surrounding flooded forests –Tonle Sap Lake’s health and ability to support the growing human population had been diminishing. In 2012, the Cambodian government implemented a new fisheries policy that abolished the privatized lot system and transitioned to a community-based approach, aiming to improve the health of the lake and the productivity of its fisheries by involving local communities. In an attempt to analyze the impacts of this reform on the fishing communities of Tonle Sap Lake, a team of researchers conducted an extensive study that surveyed the perspectives of the fishers themselves (KC et al. 2020). Survey results recently published in the journal Environmental Development revealed various perceived changes in fishing culture, such as increased access to fish, increased numbers of people fishing, and decreased use of harmful fishing methods.

The team began their study with a broad analysis of existing literature on fisheries management and governance to help develop survey questions to evaluate the success of Tonle Sap Lake’s fisheries policy reform. Next, they composed a survey that encompassed fishers’ perceptions of economic, environmental, social, and legal aspects of Tonle Sap Lake fisheries, both before and after the 2012 shift in policy. The team wanted a personal view into fishers’ experiences, and asked questions about awareness and understanding of the reform, as well as overall changes in fish catch and profit, accessibility of fishing areas, social or legal conflict with other fishers, and overall health of the ecosystems in and around Tonle Sap Lake. The comprehensive questionnaire was sent to over 500 households surrounding the lake, and the results revealed signs of positive progress.

Survey results indicated that the fishing communities of Tonle Sap Lake were well informed about the shift in fisheries policy and understood the purpose of the reform. Since 2012, fishers generally reported that economic activities had increased and social conditions had improved, while almost 80% of fishers perceived less conflict with other fishers out on the water and less fear of authorities. Fishers also noticed improvement in compliance with fishing regulations – over 60% of respondents reported a perceived reduction in illegal fishing activity such as the use of electro-fishing, large purse-seine nets, and mosquito nets for fishing. Reduction in harmful fishing methods coupled with a perceived decrease in clearing of flooded forests imply that the switch to community fisheries has had positive impacts on fishing community economies as well as the health of the lake and its surrounding ecosystems. However, while 75% of fishers reported better access to fish than before the reform, over half of the survey participants experienced a decline in the amount of fish they caught, and subsequent decreases in their fishing profit. It seems that the increased number of people fishing, potentially coupled with ecological changes in the lake, may be affecting individual catches.

The fact that the survey was administered only three years after the shift in fisheries policy adds an element of uncertainty to what may be driving the perceived changes in fishing culture. However, this research offers valuable perspective on the early stages following a fisheries management reform. The community-based fisheries management plan for Tonle Sap Lake was meant to improve the prosperity of both the lake’s natural resources and the communities that rely on them. By gauging fishers’ perceptions, the researchers were able to gain insight into the real-world effects of the reform through the pertinent lens of personal experience. While many aspects of life in, on, and around Tonle Sap Lake have seen positive improvement, it may take time for the fishing community to fully adjust to the new management plan. Measuring the changes perceived by the fishers in this study may serve as a model for assessing community acceptance and awareness of future fisheries policies.