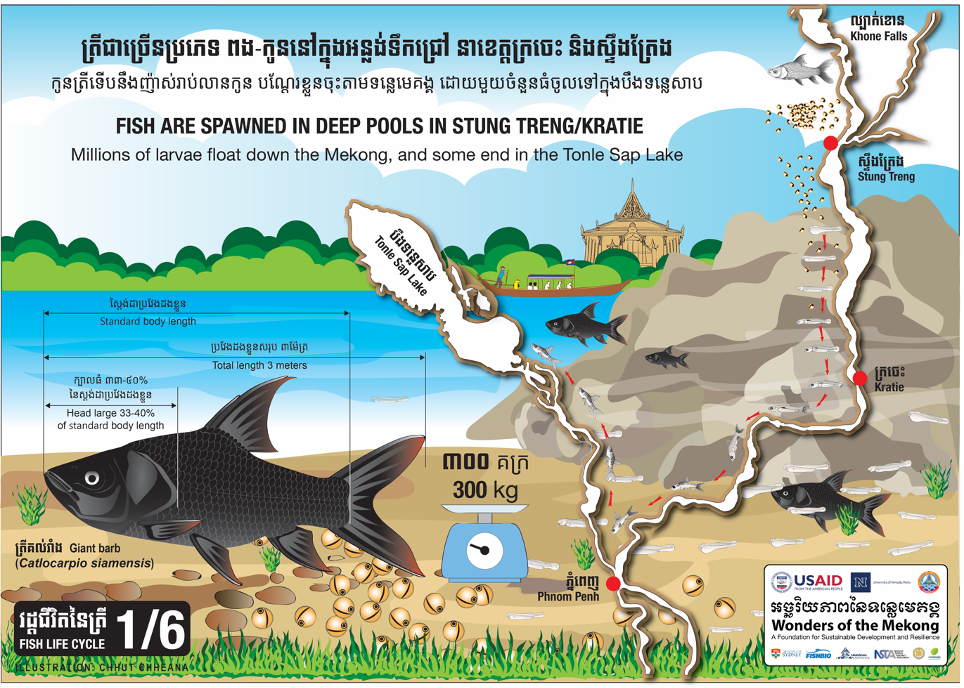 This series of infographics about the life cycles of fish in the Tonle Sap Lake and Mekong River of Cambodia were produced by Chhut Chheana for the Wonders of the Mekong project funded by USAID.

The upper Mekong River in northern Cambodia in Kratie and Stung Treng is rich in deep pools that become a refuge during the dry season for many migratory fish species. During the rainy season in May or June, many fish species begin spawning, and their larva drift into floodplains and tributaries for feeding and growth. Among them, there is the largest species of carp in the world, the giant barb (Catlocarpio siamensis), which can grow up to 300 kg in weight and 3 meters in length. Fish larvae drift downstream into floodplains of the Mekong Basin and Tonle Bassac, especially in the Tonle Sap Lake, which is a huge habitat for their feeding and growth.

The flooded forests in the Tonle Sap Lake are important for biodiversity. If these flooded forests are cut or burned in order to convert into agriculture lands in the dry season, the habitats to support fish larvae and juveniles during the rainy season will have been destroyed, so nutrient inputs are reduced, and biodiversity is also lost. In addition, as the juveniles grow, they encounter many threats, such as fishing, pollution, and altered flows by dams.

Beginning in late September or early October, when the level of the Mekong River falls below the level of the Tonle Sap Lake, the water reverses flow from the lake into the Mekong River. There is a saying that “water never flows backwards,” but the Tonle Sap River in Cambodia is the only place in the world where water reverses its direction of flow.

At the same time, hundreds of millions of fishes weighing millions of tons migrate along with the flow. Giant barb and giant catfish which are the “kings of fish” are the first to leave the lake. They are followed by a variety of fish such as trey riel (Siamese mud carp), which Khmer people like to process into pra hoc, the salty fermented fish and smoked fish, as well as hundreds of other small fish species.

Around October along the Tonle Sap River, hundreds of fish species and millions of tons of fish have left the Tonle Sap Lake, led by the “King of the Fish,” the giant barb. At the same time, tens of thousands of fishermen with all kinds of fishing gear also carry out fishing.

These are the annual migratory patterns of fish, which are considered one of the largest mass migration events on Earth. If we take a boat ride along the Tonle Sap River, which is about 120 kilometers from the Tonle Sap Lake to the confluence of four rivers (the upper Mekong, the Lower Mekong, the Tonle Sap and the Bassac rivers “Chaktomuk rivers”) in front of the Royal Palace in Phnom Penh, we will see a large number of fishermen and people gathering together carry out fishing and process fisheries products.

After going through countless obstacles, the giant barbs finally came to their original habitat in Kratie and Stung Treng provinces, which they left earlier in the rainy season. In the deep pools of the Mekong River, fish will hide during the dry season. This is their life cycle, which  includes spawning and migrating during the rainy season, and returning back to their original habitats during the dry season. The giant barb is an endangered fish species that has been designated as a symbol of the Kingdom of Cambodia under Royal Decree No. NS / RKT / 0305/149 dated 21 March 2005.

Fish are a very important source of food for people, but it is also important to protect species that are endangered, like the Giant Barb. It is important that we should think about this all together. If we harvest too many endangered species now, there will be none left for other people to enjoy in the future.