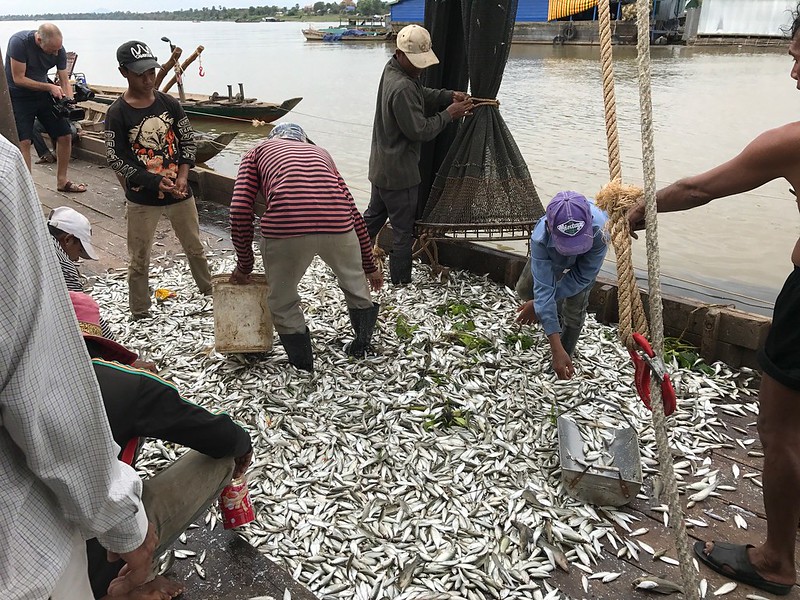 Small mud carp fishes (Henicorhynchus lobatus and H. siamensis or Trey Riel) are ecological keystone species in the Mekong River Basin. These widespread fishes with an extensive home range undertake a long migration between the floodplain areas within the Mekong River. These two species are used to produce fermented fish and fish sauce that are significant protein sources for food security for millions of people living in the region. However, information on their ecology such as their occurrence, distribution and migration patterns are poorly understood.

A recent study (Chan et al. 2019) found that the two small mud carp species can co-occur together, but spikes in abundance and movements of H. lobatus always lead those of H. siamensis. Annually, the species were detected in fish catches in northern Tonle Sap Lake between October and December, and monthly occurrences were observed in the Tonle Sap River from December to February. Moreover, after the water level drops in Tonle Sap Lake, H. lobatus individuals began to retreat earlier than H. siamensis individuals, although H. lobatus retreats more slowly (∼2.3 km/day) than H. siamensis (∼7.9 km/day), and both fish migrated at similar speeds when they reached the Tonle Sap River (∼16 km/day).

These patterns were found to correspond to the variation in water levels across the Tonle Sap Ecosystem, suggesting that the flood pulse is one of the main factors responsible for the spatial and temporal dynamics of the small mud carp species in the lake. Therefore, the seasonal and predictable patterns of the Mekong River flood pulse should be maintained to sustain the natural dynamics of fish species (e.g. the periods of recruitment, peak abundance, and movements) that have long developed and adapted to such a flood-pulse system. The timing of migration and swimming speed of the two species identified in this study should be an important part of regulation or policy considerations to better manage and conserve the two species.