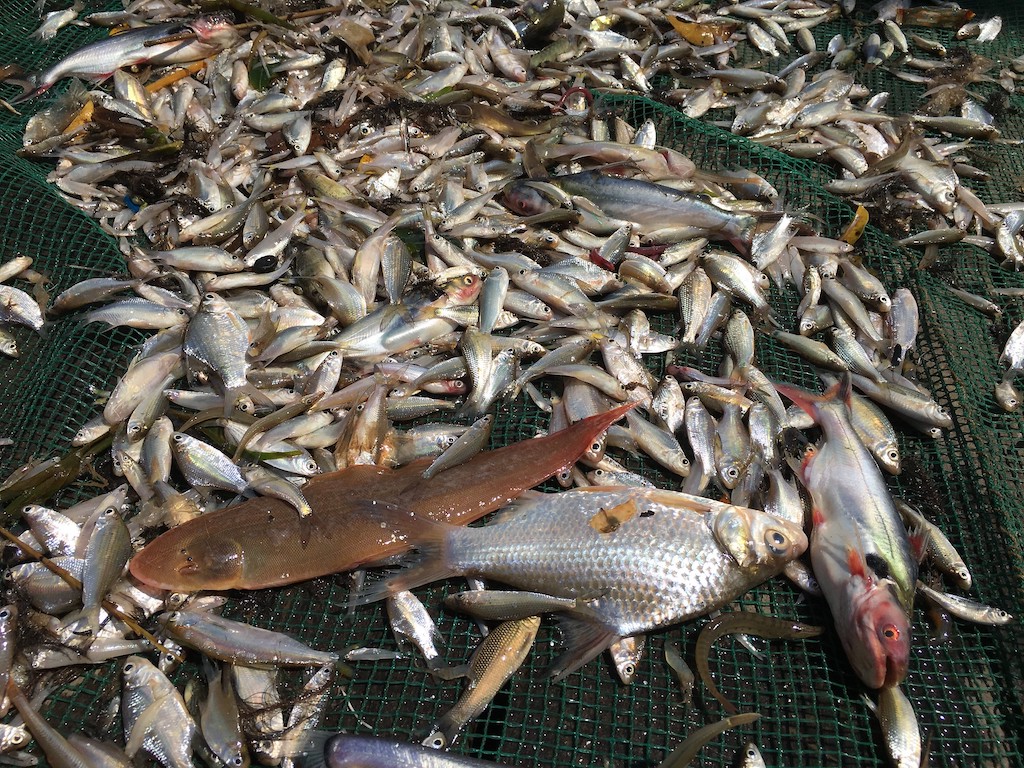 Systems that experience flood pulses are often dynamic hotspots of biodiversity, and as such  can contribute great economic and cultural significance. The seasonally flooded Tonle Sap Lake in Cambodia, for instance, provides an annual fish harvest of between 289,000 and 431,000 tons, accounting for 70% of the country’s protein. Millions of people rely on the Tonle Sap for their food and livelihoods, underscoring the importance of conserving its diverse fish community, particularly as dam construction and agricultural development portend changes to the lake’s natural dynamics. Despite  the importance of floodplains in Tonle Sap, how their habitat characteristics influence  fish community structure remains largely unknown – a topic that was addressed in a a recent study (Pool et al 2019). By sampling fish over the course of a year as the Tonle Sap transitioned from a confined lake to an expansive flooded forest, the researchers observed how and when fish species moved among habitats to take advantage of this dynamic environment.

The objectives of this study were three-fold. The first goal was to evaluate how the diversity and abundance of the fish community changed seasonally (both were predicted to increase due to presence of migratory species during the wet season). The second goal was to explore how various environmental factors contribute to fish assemblage composition across different habitat patches during the wet season. The third goal was to investigate whether dominant species in the Tonle Sap have affinities for certain areas within the floodplain. In total, nine sites were sampled with gill nets every three months from March through January, which encompassed the times when flood waters were at their lowest (June) and highest (September).

A total of 1,584 individual fish representing 53 different species were captured over the course of the study. Unsurprisingly, the lowest diversity (nine species) was captured during the dry season and the highest diversity (43 species) was captured during the wet season. As predicted, this increase during wetter months largely resulted from the presence of migratory species.Modeling revealed that vegetation structure and water chemistry explained 62% of the variation in fish communities occupying different habitat patches. Other factors found to be important included coverage by the flooded forest canopy and understory, depth, turbidity, pH, and temperature. Most of the fish species detected were found in multiple locations, suggesting that they utilize a variety of habitats during seasonal flooding, contrary to author predictions that species with different ecological niches would be restricted to different habitats.  Diversity and abundance were clearly highest at the boundary between the flooded forest and the open water of the lake.

Fish species in the Tonle Sap include both those that undertake lateral migrations from lake to floodplain, and those that traverse much longer distances to the mainstem Mekong. This creates a fluctuating ensemble of species, which must be considered to develop accurate models of the seasonal dynamics of the floodplain fish assemblage.. Difficulties inherent in studying this system resulted in a narrow spatial scope, and the 53 species detected represent only a portion of the estimated 150 species that occur in the Tonle Sap. In addition, it is unclear how ongoing development will affect the system, but the predicted simplification of the floodplain landscape and changes in flow may modify food webs by preventing seasonal access to multiple habitat types. This in turn may have major impacts for the important dai net fishery, as ecologically and economically important fish species may be less resilient to harvest pressure and climate change. Efforts to minimize land conversion and maintain natural patterns in flow may be necessary to allow fish to continue accessing the complex floodplain habitats where they have evolved to spawn and forage, ensuring they continue to feed the people of Cambodia.