Historically, being the biggest fish in the stream meant megafish species were not threatened by predators and ruled the rivers with their bulky bodies. But today, fishing pressure and human alterations to rivers have turned formerly beneficial megafish traits into burdens. As a result, megafishes, or those species that reach a maximum body size of at least 30 kg, are declining around the world. This is particularly evident in the Mekong Basin, which is home to the third highest number of freshwater megafauna species in the world. Northern Cambodia is believed to be one of the last refuges of Mekong megafish, but an expanding human population and the construction of dams may be putting this bastion at risk. Scientists from the Wonders of the Mekong project recently undertook a study to elucidate the status of Cambodia’s megafish populations based on the knowledge of local fishers (Campbell et al. 2020). The results suggest severe declines in the size and abundance of all eight species investigated. 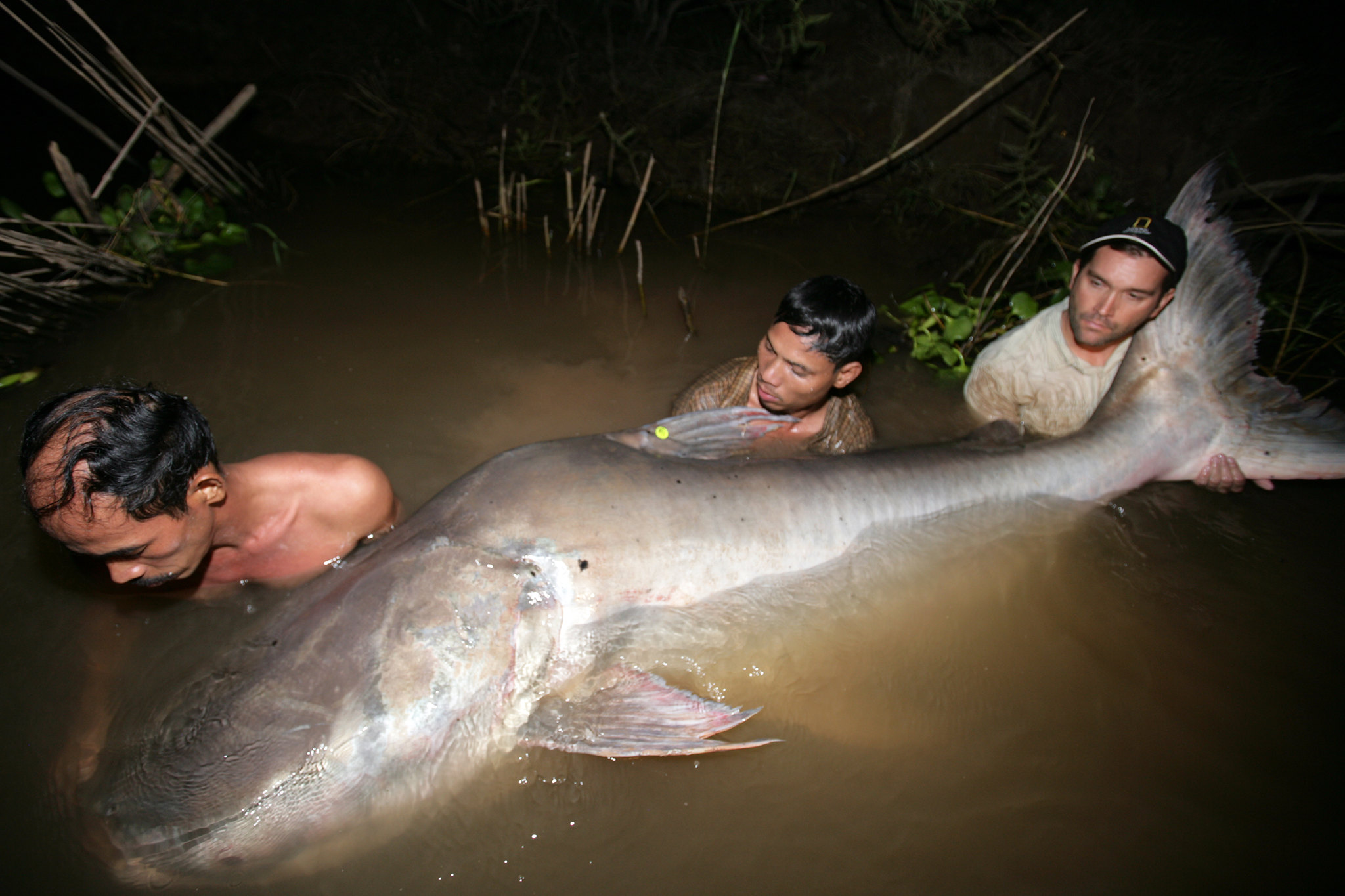 Megafishes are more than just charismatic giants, they’re also among the most ecologically, economically, and culturally significant species on the planet. These bulky top predators and hungry herbivores act as keystone species, structuring the community in the ecosystems they inhabit. Moreover, they often undertake long migrations, helping to move nutrients to and fro in a watershed. Their immensity also makes them an obvious choice for flagship species in efforts to foster stewardship of aquatic biodiversity. Unfortunately, neither cultural importance nor legal protection has prevented the widespread illegal trade of these species. Habitat degradation and rampant poaching make the need for megafish research all the more urgent, which is why this recent study sought to assess multiple megafish species in the Mekong, Sekong, Sesan, and Sre Pok (3S) rivers in northern Cambodia. The rarity of these giant fishes makes them challenging to study; therefore, the researchers leveraged the knowledge of fishers, whose daily interactions with rivers and fish provide valuable insights into megafish population status and threats.

The researchers interviewed 96 fishers in 12 villages to gain insight into the rarity of megafish, trends in their abundance and body sizes over time, and important threats to their persistence. Rarity was assessed by asking fishers to provide the month and year when they most recently captured each megafish species, and perceived abundance was calculated by asking fishers to rank their perceived abundance of each species 20, 10, and five years ago, as well as at present. Questions were also posed about the size of most recently captured megafish, as well as the average size of megafish that fishers captured over the past 20 years. Finally, fishers were asked to identify what they perceived as the greatest threats currently faced by these megafish species. In total, the researchers asked the fishers about eight species, including the iconic giant barb (Catlocaprio siamensis) and Mekong giant catfish (Pangasianodon gigas). Other species included the giant salmon carp (Aaptosyax grypus), wolf barb (Luciocyprinus striolatus), giant pangasius (Pangasius sanitwongsei), Isok barb (Probarbus jullieni) giant freshwatar whipray (Urogymnus polylepis), and the catfish Wallago micropogon. 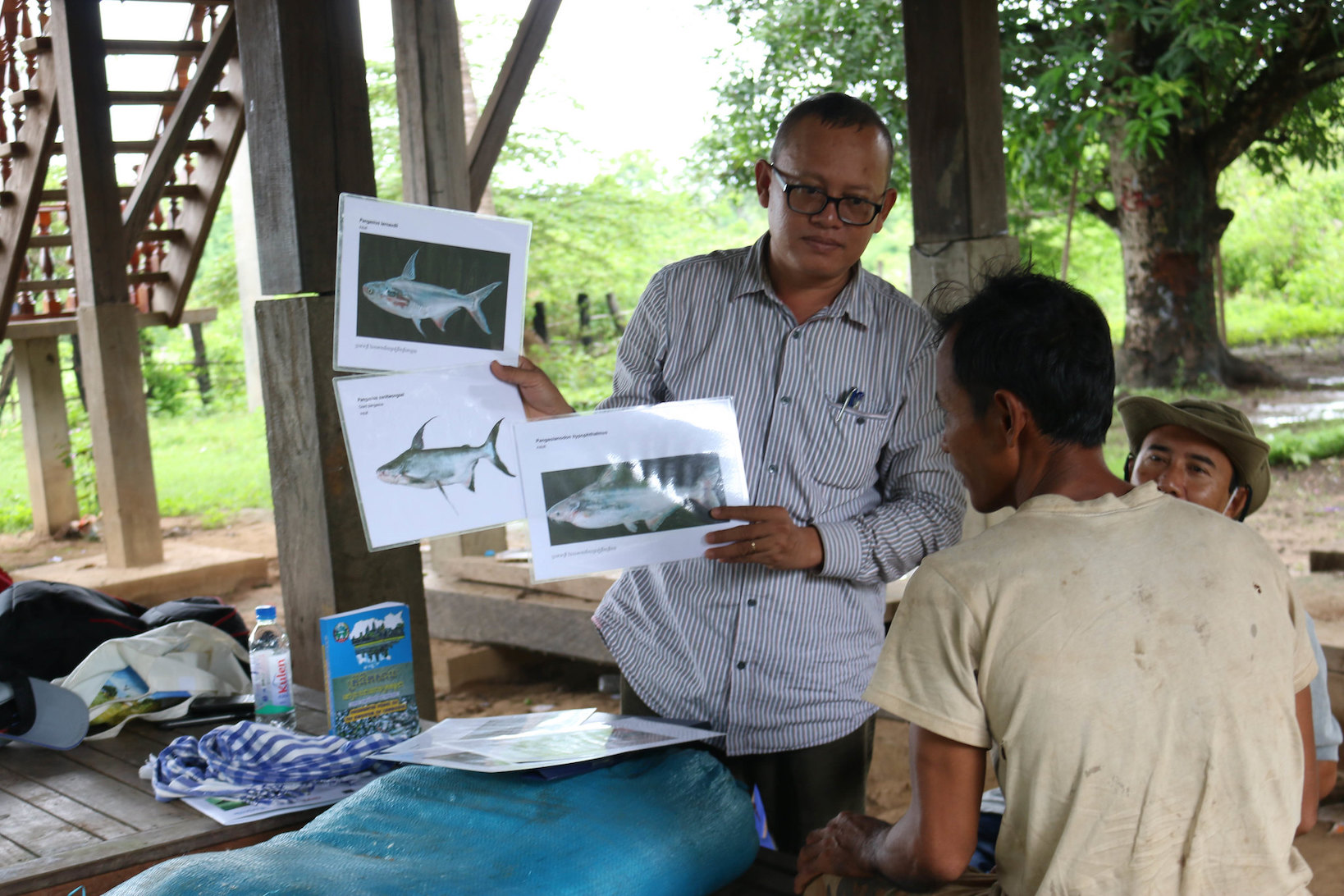 Analysis of fisher interviews indicated that all eight megafish species exhibited a decreasing trend in perceived abundance. In fact, fishers indicated that they believed all of the species were either already gone from the study region or were likely to vanish in the near future. The body sizes reported by fishers also indicated that for most species, the mean size at last capture was only 1-6% of maximum reported sizes. The fishers attribute these declines to a number of major threats, especially illegal fishing methods such as electrofishing, nets of illegal mesh sizes, dynamite, and poison. The decreasing size and abundance of individuals suggests that nearly all mature adults have already been lost. This has major implications for extinction risk, and suggests legal protections are not having the desired effect. But there is hope: Cambodia’s decision in March of 2020 to halt the construction of all mainstem hydropower dams for at least ten years will help maintain open migration channels and natural flood cycles in this critical habitat. Moreover, the knowledge of the people who know the river the best – the fishers – may help scientists and managers find an effective path to conserving these titans of the stream.