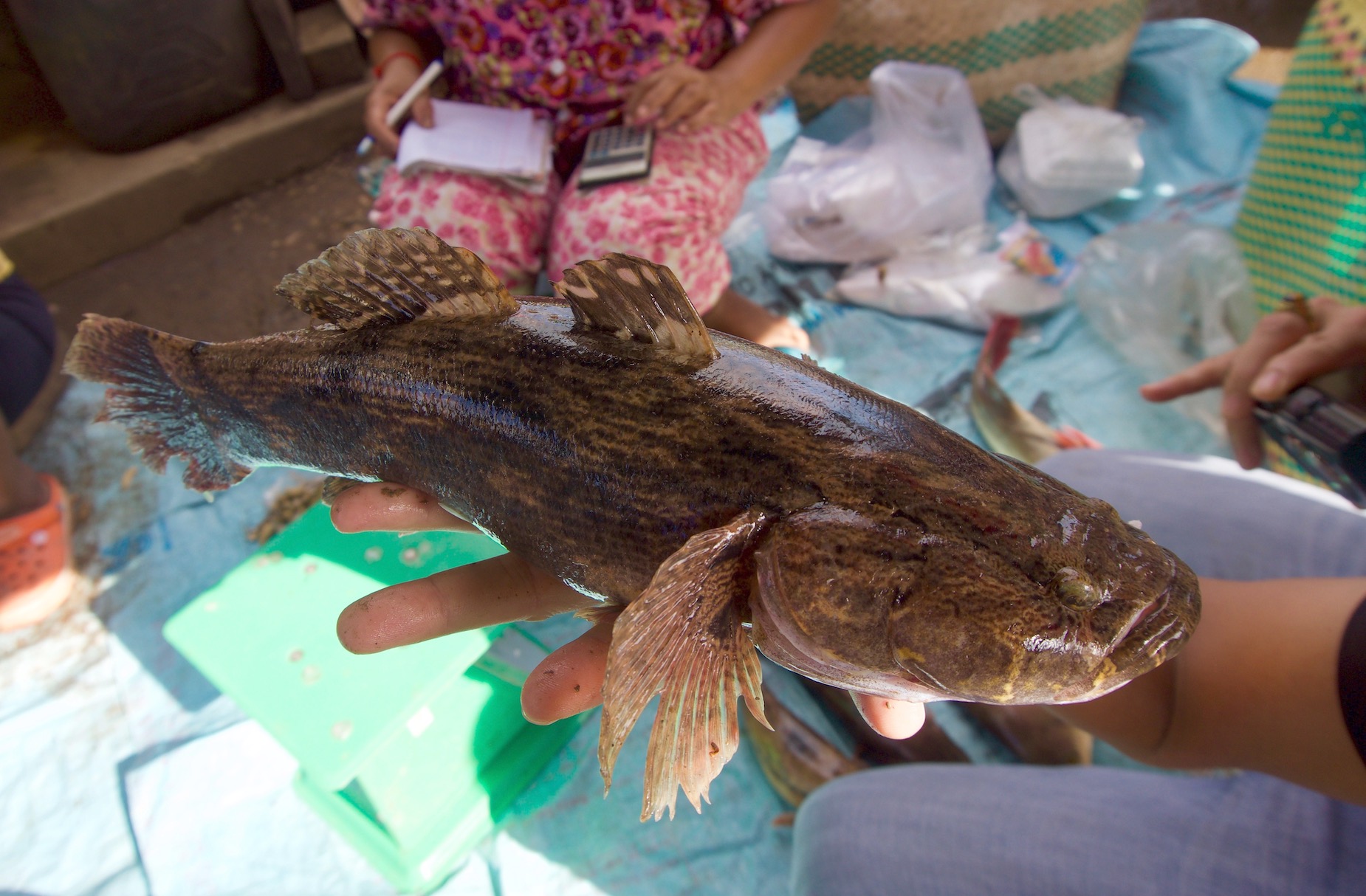 During a visit to the large Mekong fish landing site in Khong District, Champasak Province, the staff of FISHBIO Laos staff found many different fish species, but one of the most striking that they observed was the marble goby (Oxyeleotris marmorata). The marble goby lives in both freshwater and brackish water, and has a wide-ranging distribution in almost all Southeast Asian counties, including Thailand, Laos, Vietnam, Cambodia, Malaysia, Singapore, Indonesia, and the Philippines. This species is currently listed as a species of Least Concern on the IUCN Red List due to its common occurrence. In Laos, the marbled goby can be found almost everywhere, such as in the Mekong River and its tributaries, lakes, ponds, swamps, and reservoirs. 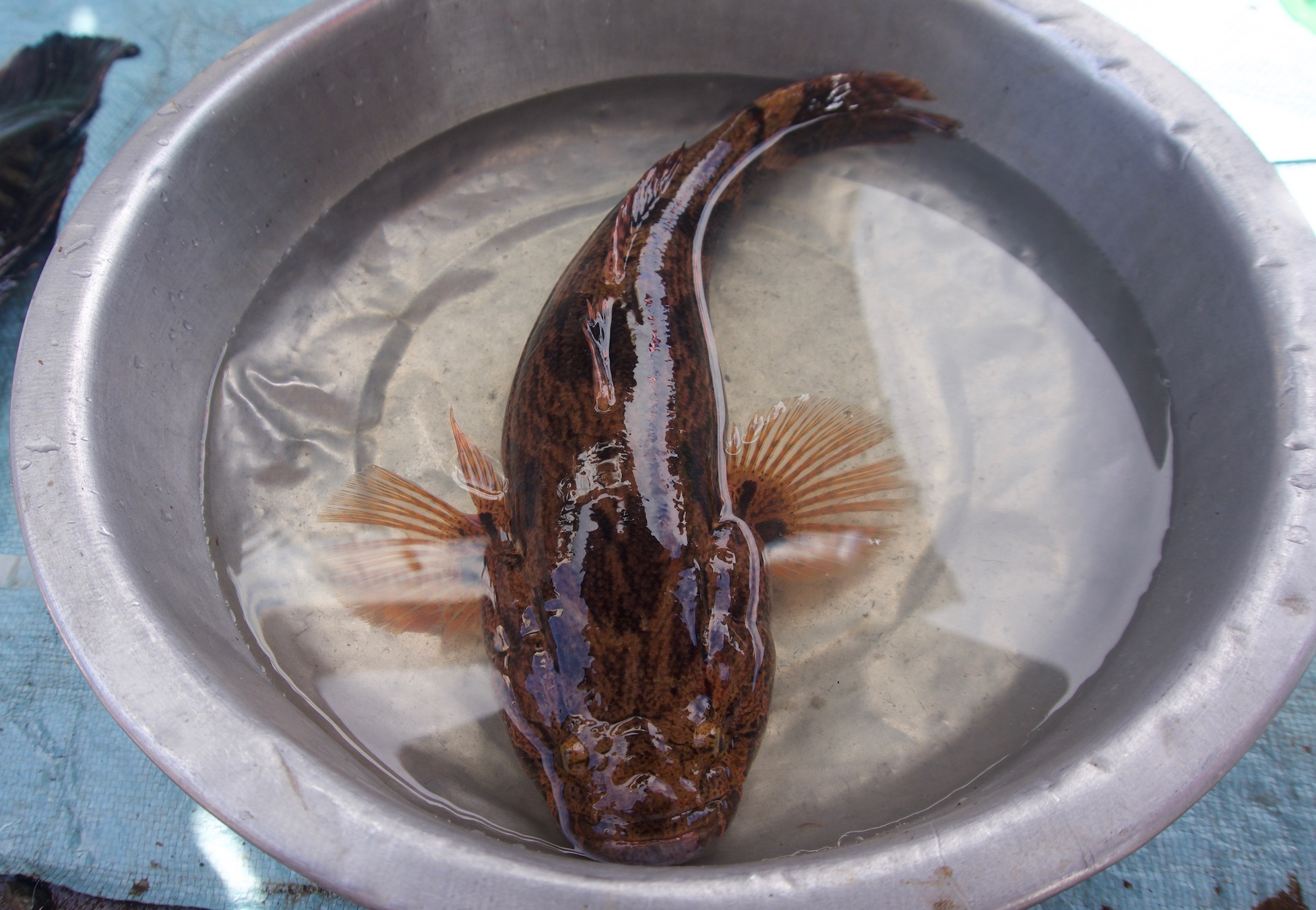 In Laos, the marbled goby is called “pa bu” and this local name is well known among fisherman all over the country. The goby’s body size is generally about 30 cm (12 in), but if it is a very old fish, the maximum length can be 65.0 cm (26 in). Its whole body is covered with very fine scales. The marbled goby is quite a beautiful fish that can have many different colors within a single individual, from red to brown to black. This is a carnivorous fish that hides during the day time on the river bottom in rocks or plants, and is often unmoving while it looks for food at night. They are strong and powerful ambush predators that wait for food to come to them. They eat prey such as worms, prawns, aquatic insects, mollusks, crabs and small fish. 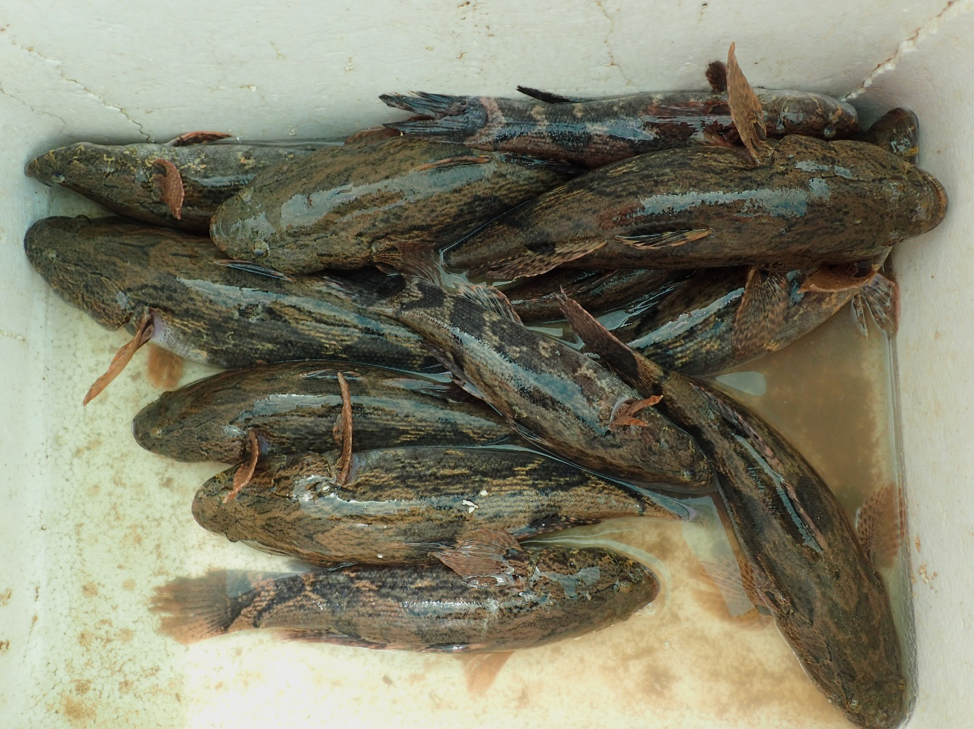 Gobies can be cultured with other fish to control their populations. In Thailand, marbled goby are cultured in tilapia ponds to control the density of the tilapia population and provide additional income. If their density is too high, tilapia will grow slowly and not reach desired sizes. Gobies can be raised as ornamental fish for aquariums, but most are raised for consumption because their white meat is clean and delicious, and can be prepared in a variety of dishes such as steamed fish with lemon, goby soup, and fried fish. Marbled gobies are also economically important fish. In Thailand, this species sells for about 200–350 Baht ($10)/kg and a popular size is about 400–800g. The goby price is about $10/kg in Stung Treng Province, Cambodia, and 70,000 Lao Kip ($9)/kg in Pakse District, Champasak Province in Laos. Gobies are of high value and many people are interested in raising this species in cement tanks, cage culture, and ponds. While goby cage culture is popular in Thailand, aquaculture for this species has not yet developed in Laos, and there could be future opportunities for helping to meet the country’s demand for this popular fish.