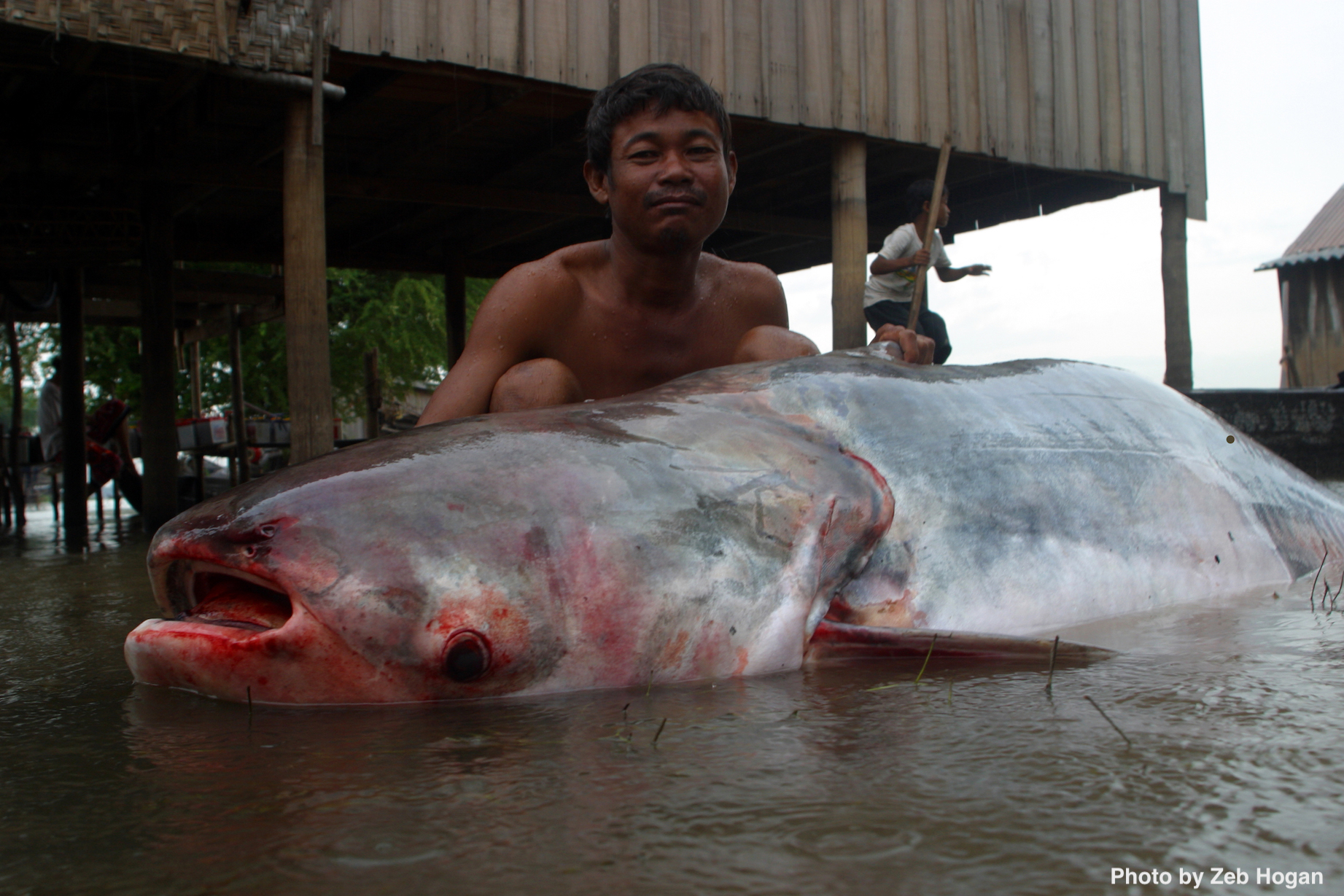 For many people, the term “megafauna” evokes images of terrestrial or marine behemoths of bygone eras, like the mastodon or the megalodon. But contemporary Earth is home to its fair share of giants, many living in rivers and lakes. Unfortunately, these freshwater ecosystems are among the most threatened on the planet, and despite their imposing stature, freshwater megafauna are the group of animals most at risk. Defined as fish, amphibians, aquatic mammals, and aquatic reptiles with maximum body masses greater than 30 kilograms (~66 lbs), freshwater megafauna species have a heightened risk of extinction due to their need for complex habitats combined with their low reproduction and slow growth. As a result, the IUCN Red List describes 34 of these species as critically endangered and 51 as endangered or vulnerable. While declines in terrestrial and marine megafauna species have been thoroughly documented, monitoring of freshwater giants has been quite limited. To address this gap, a recent review compiled data on freshwater megafauna around the globe to quantify changes in their population abundance and distribution (He et al. 2019).

The researchers noted that certain species were disproportionately represented in existing data. For example, most time-series data for freshwater megafauna were available in Norway, the United States, and Canada due in large part to the wealth of information on salmon and trout species. In stark contrast to this rich vein of data, regions abundant in megafauna – like Africa, South America, and Southeast Asia – have very limited time-series data. Despite the gaps, a glaring pattern of decline became clear: between 1970 and 2012, global freshwater megafauna populations declined by an estimated 88%. Mega-fishes were hit the hardest, experiencing an estimated 94% decline. The most dramatic declines occurred in the Indomalaya region (South and Southeast Asia) and the Palearctic (northern Africa, Europe, and northern Asia), which saw 99 and 97% reductions in their freshwater megafauna, respectively. In regions with sufficient data about species ranges, similarly distressing patterns were detected. In Europe, 42% of freshwater megafauna species had been extirpated from at least 40% of their historic range, and the particularly hard-hit European sturgeon (Acipenser sturio) had lost about 99% of its range.

The data indicate that freshwater megafauna are declining across the globe, but a lack of long-term monitoring for many of these colossal creatures has resulted in uncertainties. Information on population sizes prior to 1970 is spotty at best. Even for those species with available data (such as sturgeon), there are indications that populations had already significantly declined prior to this date, making it difficult to establish a historical baseline for comparison. In addition, there are very limited data for regions of the world where megafauna diversity is highest. These factors suggest that estimates of decline would likely be even more precipitous if better data were available. Among the giants, mega-fishes face particularly severe risk due to their susceptibility to overharvest and the construction of dams, pressures which are likely to increase in biodiversity hotspots like the Amazon, Congo, and Mekong.

These grim findings raise the question: what does the loss of the biggest animals in the lake and stream mean for freshwater ecosystems? For one, the loss of top predators can have major impacts on how ecosystems function by simplifying formerly complex food webs. Moreover, many freshwater megafauna species are ecosystem engineers, meaning they physically modify rivers to create important habitats (think beaver ponds and hippopotamus wallows). The loss of megafauna species can ripple throughout and beyond freshwater ecosystems, but the good news is opportunities still exist to protect these important animals. In fact, some conservation efforts have already led to increasing or at least stable populations of species like white sturgeon (Acipenser transmontanus), green sturgeon (A. medirostris), and American beaver (Castor canadensis). Although current monitoring and conservation efforts are currently insufficient for most freshwater megafauna, people’s inherent interest in large, charismatic species could be used to both inform the general public about their ongoing decline and to promote conservation efforts. The study authors suggest focusing on underrepresented, megafauna-rich watersheds and creating a routinely updated database on freshwater megafauna species. Even though it may seem like the biggest animals should be among the most noticeable and well-studied, there is still much we don’t know about them. Hopefully, targeted conservation and research efforts will help keep these titans of the stream from slipping into the murky depths of extinction.