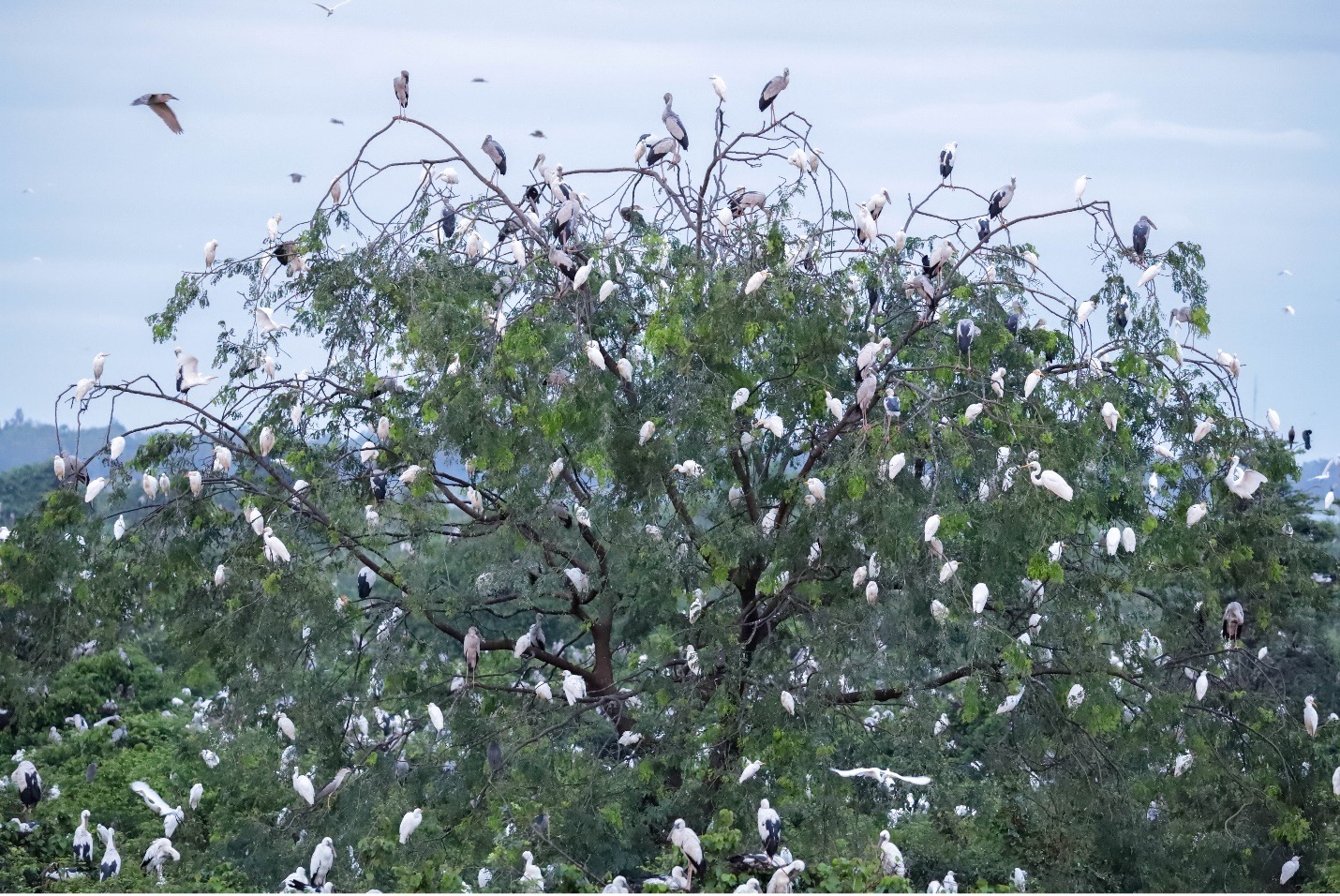 Prey Veng Province: Flocks of hundreds of thousands of birds can be found in the Toul Poan Taley Boeung Sne multiple use area, located in Toib Sdach Kampong Sleng Village, Bateay Commune, Ba Phnom District, Prey Veng Province. With an area of 3,557 hectares, situated in a gulf of 86 hectares, and 70% surrounded by water, the Toul Poan Taley Boeung Sne is the perfect peaceful habitat for many birds migrating through the area. This spot is also a convenient tourist destination for any bird watching enthusiasts, as it is only about an 80 km drive from Phnom Penh City or 20 km from Tsubasa Bridge, also known as the Neak Loeung Bridge.
Mr. Nuon Sareth, Deputy Manager of Toul Poan Taley Boeung Sne, explained “This sanctuary was established by the local community in 2006 with the purpose of protecting the flooded forests because they provide important spawning ground and habitat for fish and a number of bird species.” He added that prior to its national designation as a multiple use area, “Originally the area was called Tuol Neak Ta Poan Taley Conservation Area, and was recognized by the commune and district authority.” 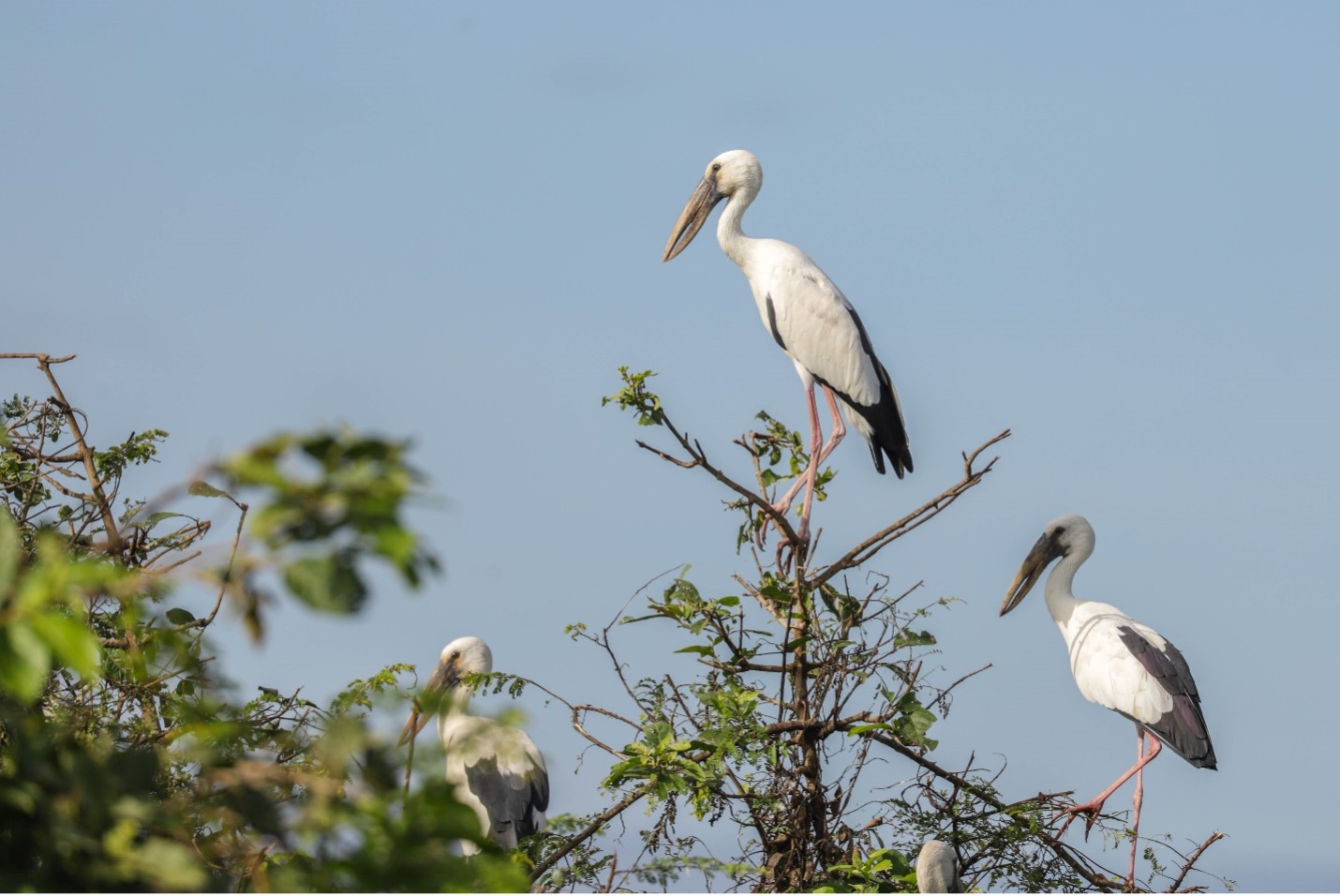 Mr. Prak Phally, a community member of Toul Poan Taley Boeung Sne multiple use area, said that back in 2015-2016, the majority of bird species, including common seasonal birds, only visited the area in the rainy season to feed. He continued, “In the past, huge flocks flew from every corner of the country to temporarily reside and feed here at the Toul Poan Taley Boeung Sne site. When the dry season arrived, the birds flew back to their original habitats. However, starting in 2019, the birds began to build permanent nests and breed here.” Mr. Phally added with pride that this is due, in part, to the community of people in Prey Veng Province as well as people around the country and their efforts to protect and conserve the birds and their natural habitat. Their commitment has made it possible for the flocks to live and forage for food harmoniously.
The Deputy Director of the Prey Veng Environment Department, Mr. Heng Saing Hy, said, “During the bird flu outbreak crisis in March and April 2021, thousands of birds died. However, now, new clutches are appearing and there are birds migrating from other regions of the country to reside here in the Toul Poan Taley Boeung Sne area, increasing the bird population significantly.” Mr. Saing Hy continued “Avian influenza, commonly known as bird flu, wiped out at least 2,000 birds in this sanctuary, mostly of the Asian openbill species.
The Asian openbill, or the Asian openbill stork, appears to be the dominant species in this conservation area with a total population of approximately 10,000 birds. The Asian openbill, scientifically known as Anastomus oscitans, was considered to be “of least concern” by the IUCN Red List in 2016. The species inhabits a wide geographical range, found across Southeast Asia in Myanmar and other Mekong Basin countries such as Cambodia, Laos, Thailand, and Vietnam. Many other birds can also be observed among the Asian openbills at Toul Poan Taley Boeung Sne area, namely the lesser adjutant (Leptoptilos javanicus), the painted stork (Mycteria leucocephala), the spot-billed pelican (Pelecanus philippensis), the oriental darter (Anhinga melanogaster), and the white-shouldered ibis (Pseudibis davisoni). 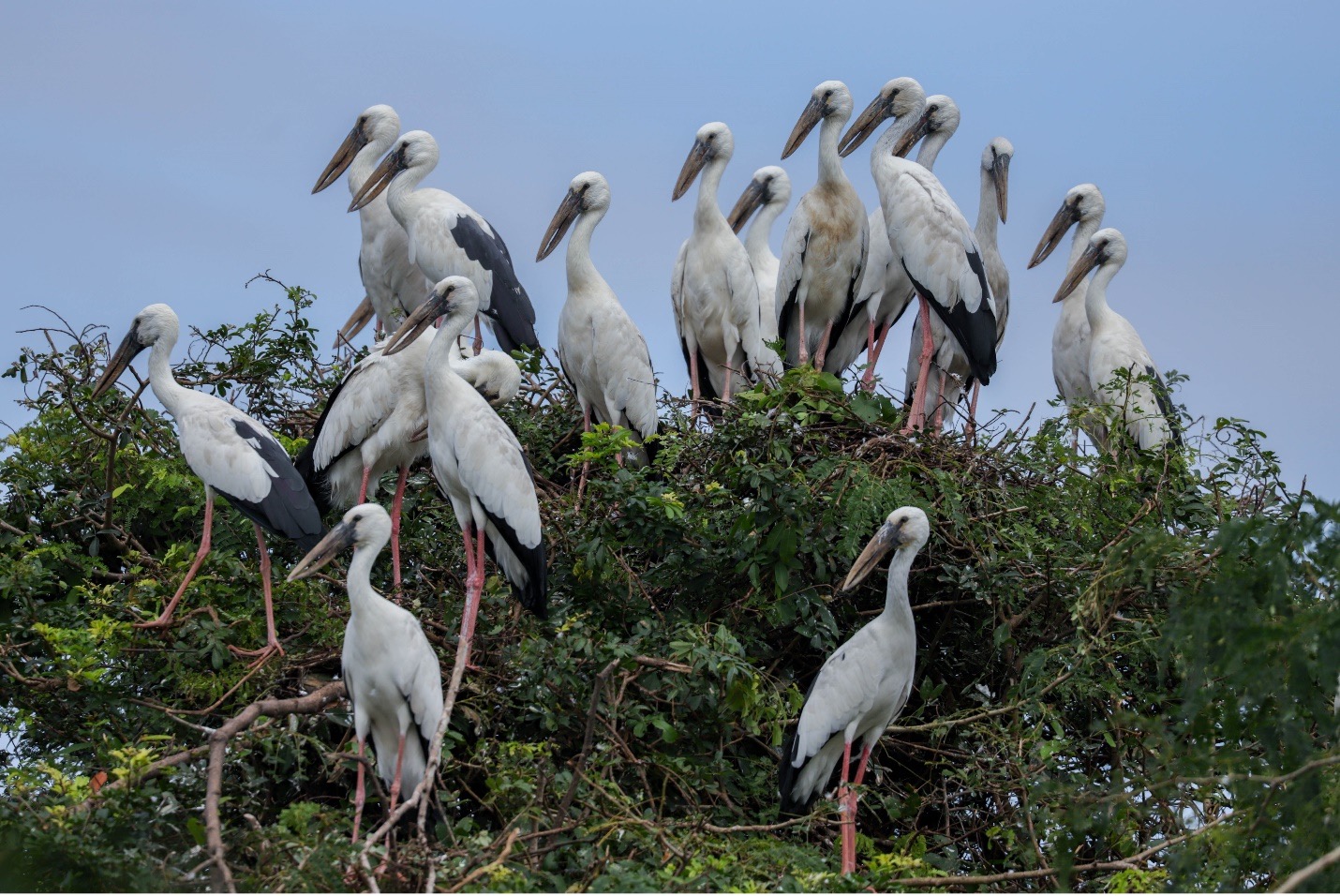