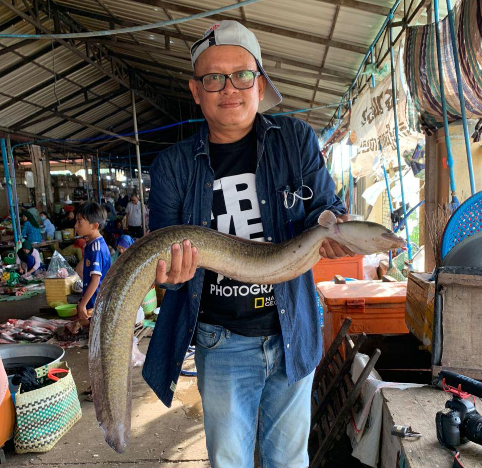 Of all the river basins in the world, the Mekong is home to third highest number of freshwater megafauna species. One of these freshwater giants is the aptly named giant mottled eel (Anguilla marmorata). While conducting a study on fish functional diversity in key freshwater habitats in Cambodia, the Wonders of the Mekong Project team recently encountered a specimen at the Dey Dus Market in Kampong Cham Province. The particular individual shown in this photo weighed about four kilograms and was 107 centimeters long, but the species is known to grow far larger, with females sometimes reaching adults weights of 20.5 kilograms and lengths of 70 centimeters.

This species is catadromous, meaning that individuals are born in saltwater and rear in the ocean or estuaries, and as adults migrate upstream in freshwater rivers to spawn. In the Mekong basin, spawning adults travel to the upstream Mekong River, as well as the Sekong, Sesan, and Sre Pok (3S) rivers and the Tonle Sap Lake. A voracious nocturnal carnivore, mottled eels hunt at night for crabs, frogs, fish, and other aquatic animals.

Although the giant mottled eel is not currently listed as threatened on the IUCN Red List like other megafish species, its numbers appear to be decreasing and it is increasingly rare for fishers to catch one. This apparent disappearance may be due to human pressure such as overfishing and environmental changes.