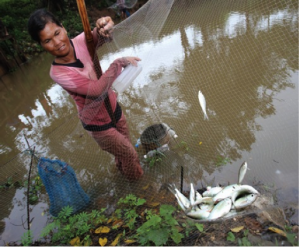 This project is investigating whether construction of permanently-operating fishways provide quantifiable social, economic and environmental benefits to floodplain wetlands and communities. A baseline survey of fish harvesting and use by villagers was carried out in September 2011 using semi structured interviews with 60 households from 6 villages around the wetland. Another survey interviewed 23 women and 25 elders in November 2012 from the same villages to explore gender differences and traditional conservation practices. The village survey will be repeated post fishway construction in 2015 to determine any observed differences in fish migration, species abundance, and quantity or quality of fish sold and used by villagers.

Key findings show that villagers spend between 10 and 30 hours per week fishing in the wetland with significantly more hours in the dry season that wet season. Most people fish nearby their village and use gill nets. Forty one species were harvested with five more popular species. Catches varied from 0.5 to 12 kg per day (average 3kg), most of which was consumed or given to relatives. However, increasingly people are selling fish direct to the local market. All respondents reported a decline in fish numbers since the irrigation weir was built in the 1960s. Reasons given were more people fishing using modern methods, habitat destruction and not enough water in the dry season.

Survey results were presented at the annual project meetings in Vientiane in January 2012 and August 2013 with a draft report. A journal paper will be developed for submission in 2015. This is a subproject of ACIAR project FIS 2009 041 “Development of fish passage technology to increase fisheries production on floodplains in the lower Mekong and Murray-Darling River basins.”