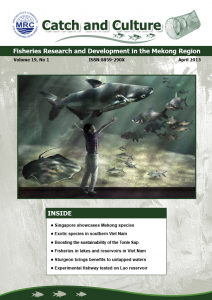 Catch and Culture was established by the Mekong River Commission in 1995 as the fisheries research and development newsletter of the Mekong region. The newsletter is distributed to more than 650 subscribers around the world. Since 1993, it has been edited by Peter Starr, an Australian author and journalist who has been living and working in East Asia since 1986. Chhut Chheana, a veteran Cambodian graphic designer, has been responsible for the layout and design of the newsletter since 2010 when the Mekong River Commission Fisheries Programme moved from Vientiane to Phnom Penh. Catch and Culture is published three times a year in English, usually in April, August and December. Omnibus editions in the Khmer, Lao, Thai and Vietnamese languages are also produced, usually once every year. Back issues are available here as PDF documents: http://www.mrcmekong.org/news-and-events/newsletters/catch_and_culture