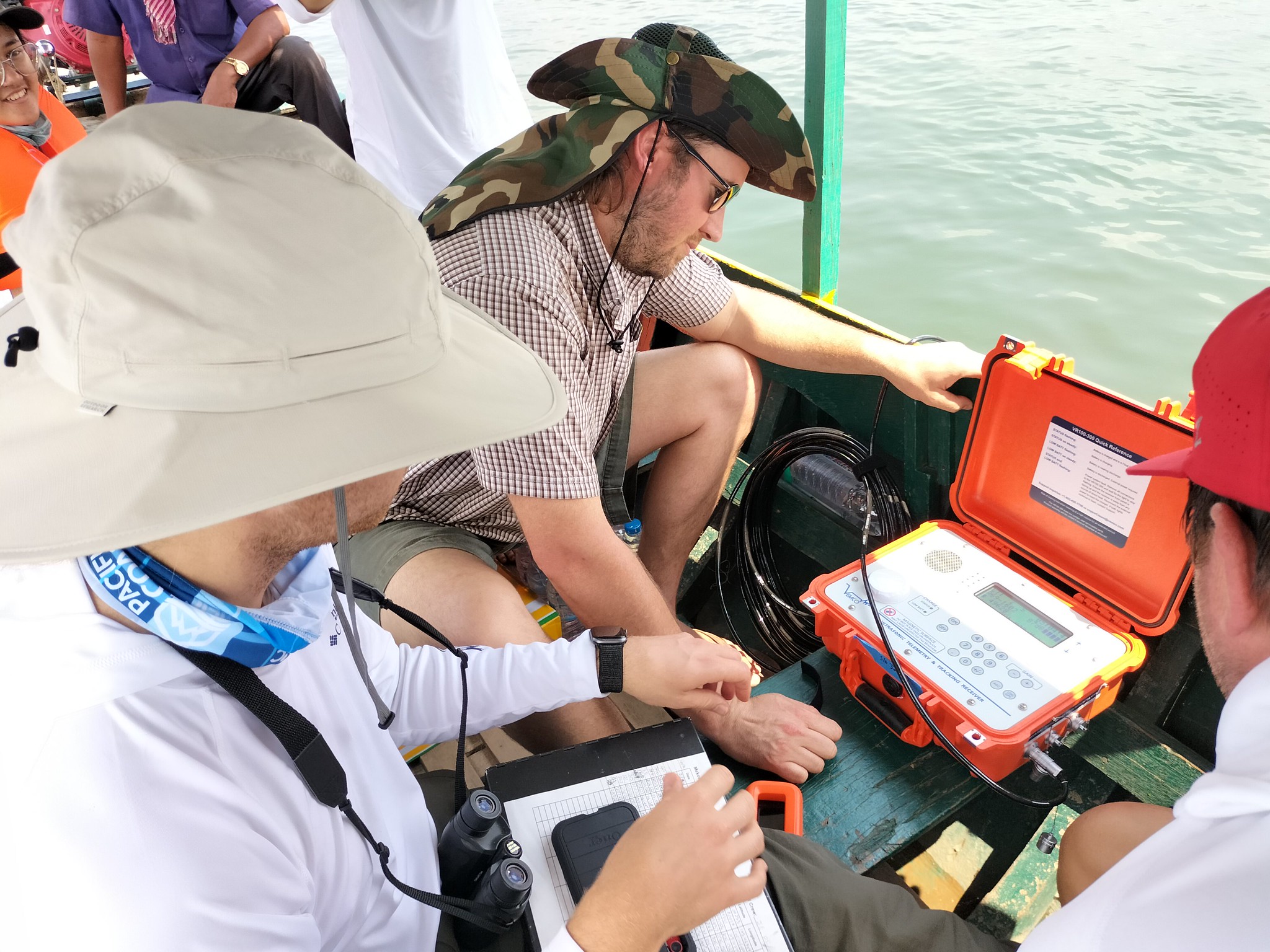 From massive upstream migrations to short swims on and off a floodplain, movement among different habitats is a vital part of the life cycles of many fish species. This is certainly the case for fish in the Mekong Basin, which express a diversity of migratory behaviors. As human development and climate change continue to alter the ecosystem, it is becoming increasingly important to understand how fish migrations may be impacted by a changing river. Gathering data on migratory fish as they swim long distances throughout a watershed can be very challenging, but a technique known as acoustic telemetry provides a powerful means of following fish movements. The Wonders of the Mekong project is currently funding a collaborative effort between FISHBIO scientists and the Cambodian organization Young Eco Ambassadors (YEA) to deploy acoustic telemetry technology in Cambodia for the first time in order to gather valuable information on fish movement in the lower Mekong Basin. This pilot effort will also explore the utility of this technology for conducting research across borders in the Mekong to inform migratory fish management.

Sound waves travel more quickly and farther through water than they do in air. These properties allowed for the development of acoustic telemetry, which uses tags that emit sound signals and receivers (also called hydrophones) that listen for these signals to track the movements of tagged animals. This technology has been used extensively to study fish movement in oceans, lakes, and rivers, and it has even been applied in two pilot studies in the Mekong in Thailand. In the first study, Japanese researchers tagged and tracked hatchery-reared Mekong giant catfish (Pangasianodon gigas). They were able to detect 43% of released fish, and tracked certain individuals for periods of nearly 100 days and across distances of up to 80 kilometers. In the second study led by Wonders of the Mekong principal investigator Zeb Hogan, scientists released multiple species of hatchery-reared catfish that were implanted with a variety of different types of acoustic tags. They successfully detected more than 90% of tagged fish after their release, and tracked one individual for nearly an entire year as it moved almost 90 kilometers. Both of these pilot studies provided valuable insight into best practices for acoustic telemetry in the region, but both efforts tagged relatively few fish and relied on a network of relatively few receivers. The current project in Cambodia is using lessons learned to build on these studies by tagging a greater number of fish and establishing a much larger receiver network to track fish in the northern Cambodian Mekong as well as the Sekong, Sesan, and Srepok (3S) river basin in north eastern Cambodia. 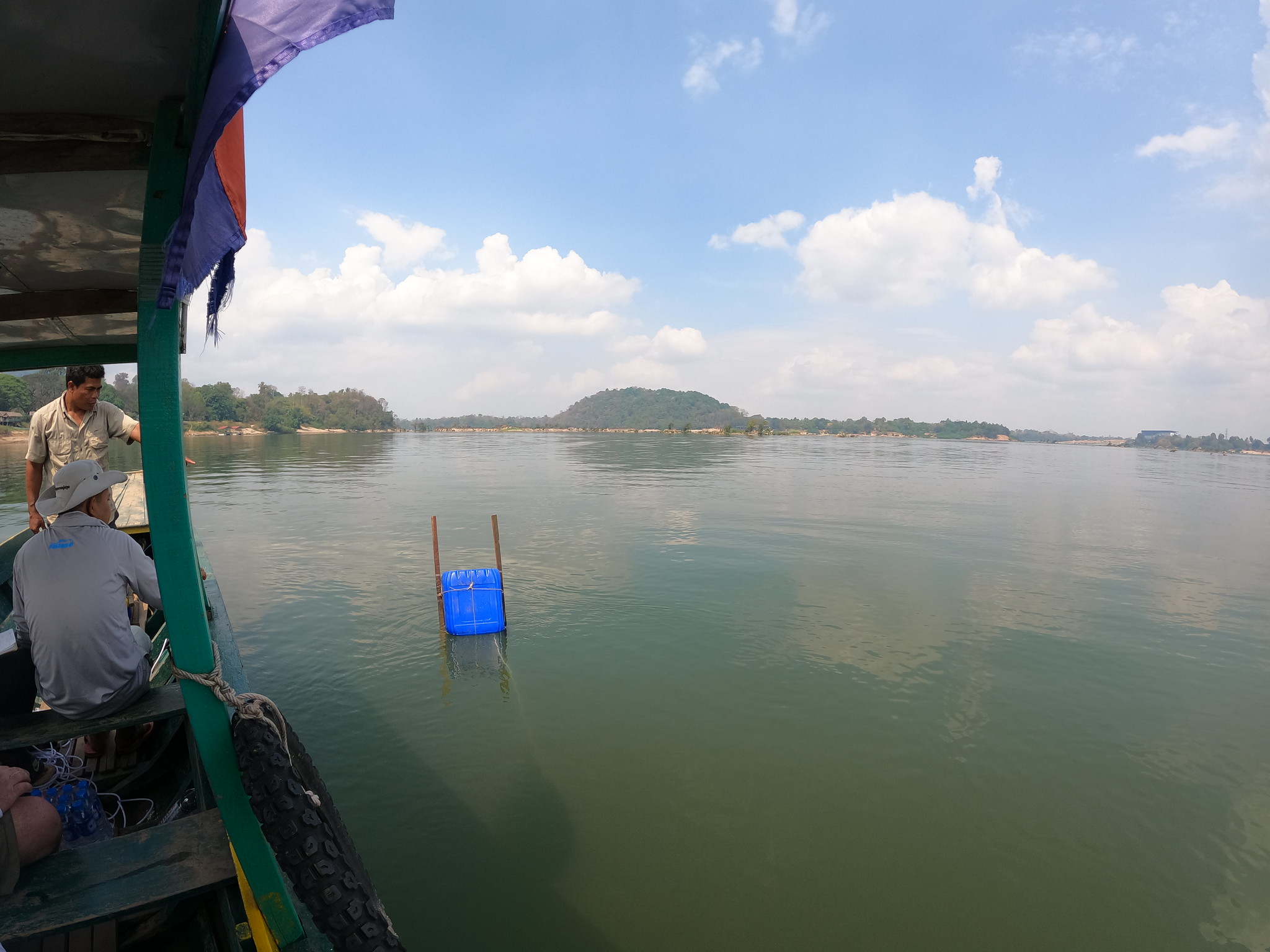 Earlier this year, FISHBIO and YEA staff surveyed numerous field sites along the Mekong River from the Cambodia border with Lao PDR to Kampong Cham (~300 kilometers downstream), as well as in the lower portions of the 3S Basin. The main goal was to identify locations for receivers that would allow for good tag detection, namely areas with deep pools and few obstructions such as boulders, trees, or other structures in the channel. The trips also provided an opportunity to test the range of different acoustic tags, in order to determine the optimal placement of receivers to detect tags across the entire width of the river. During each site visit, the researchers also met with local officials and communities to begin building a network of people to help deploy and maintain the receivers, and also provide fish for tagging. This trip led to the selection of 11 field locations where a total of 36 acoustic receivers will be deployed. Particular attention was given to select suitable sites near the Cambodia/Lao PDR border, because a concurrent effort by the Mekong River Commission’s Joint Environmental Monitoring (JEM) Program is working to acoustically tag and release fish in Lao PDR. The ability to track fish movement across this boundary may provide significant data on transnational fish movement, and highlights the great value of international cooperation in fisheries management. 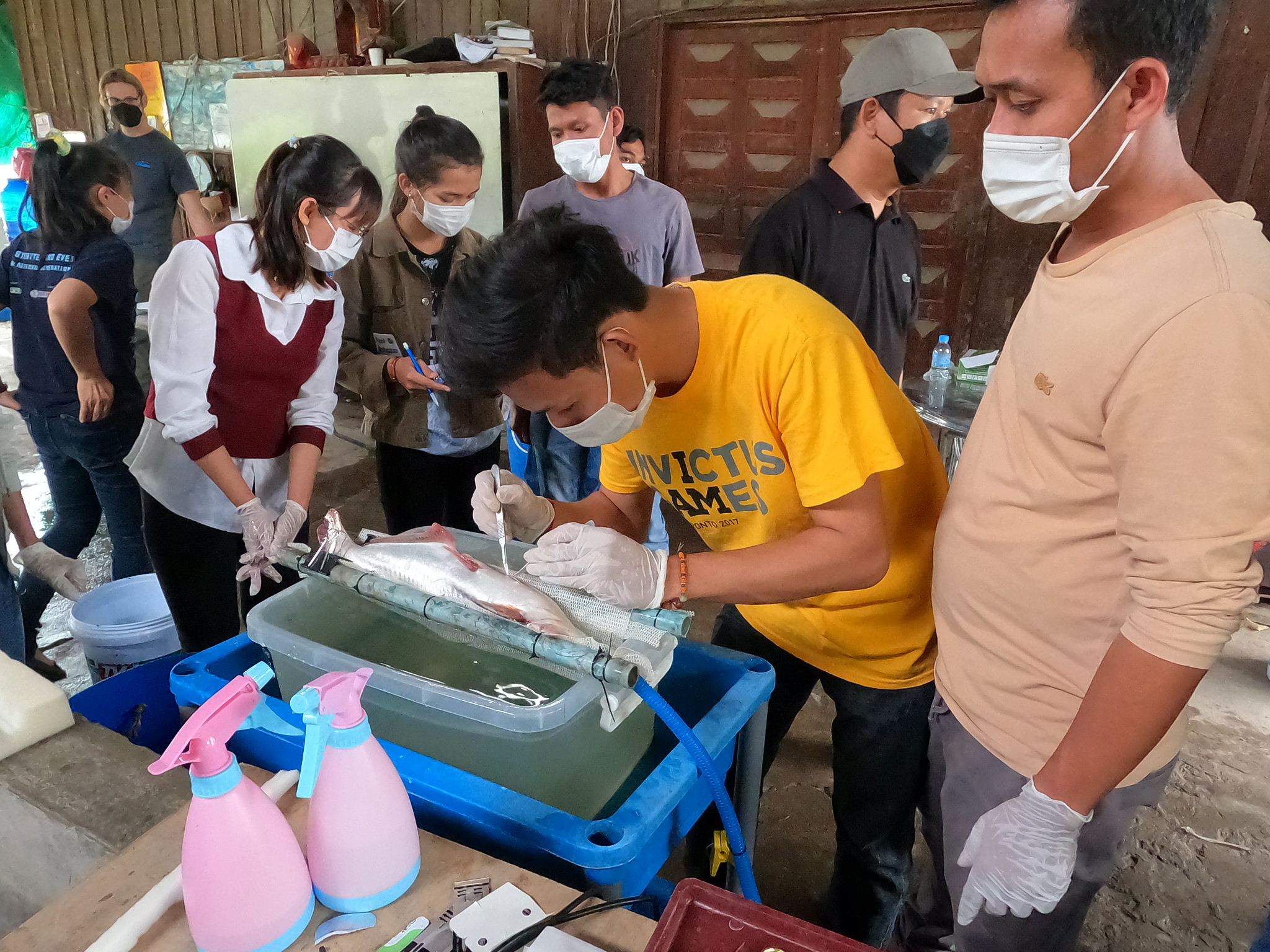 During the scouting trip, FISHBIO and YEA staff also led a two-day training on the principles of acoustic telemetry and tag implantation surgery for staff from the Inland Fisheries Research and Development Institute and students at the Royal University of Agriculture in Phnom Penh. FISHBIO staff will travel back to Cambodia this June, and will work with these newly trained students and officials to deploy acoustic receivers and begin tagging fish for the study. With the help of YEA, we will also hold community meetings in villages near each receiver site to continue spreading the word about this study and its importance for fish conservation in the Mekong. With careful planning and coordination, these receivers will provide the first ever acoustic data on fish in the Cambodian Mekong, and may be an important step towards a better understanding of fish movement in the basin.