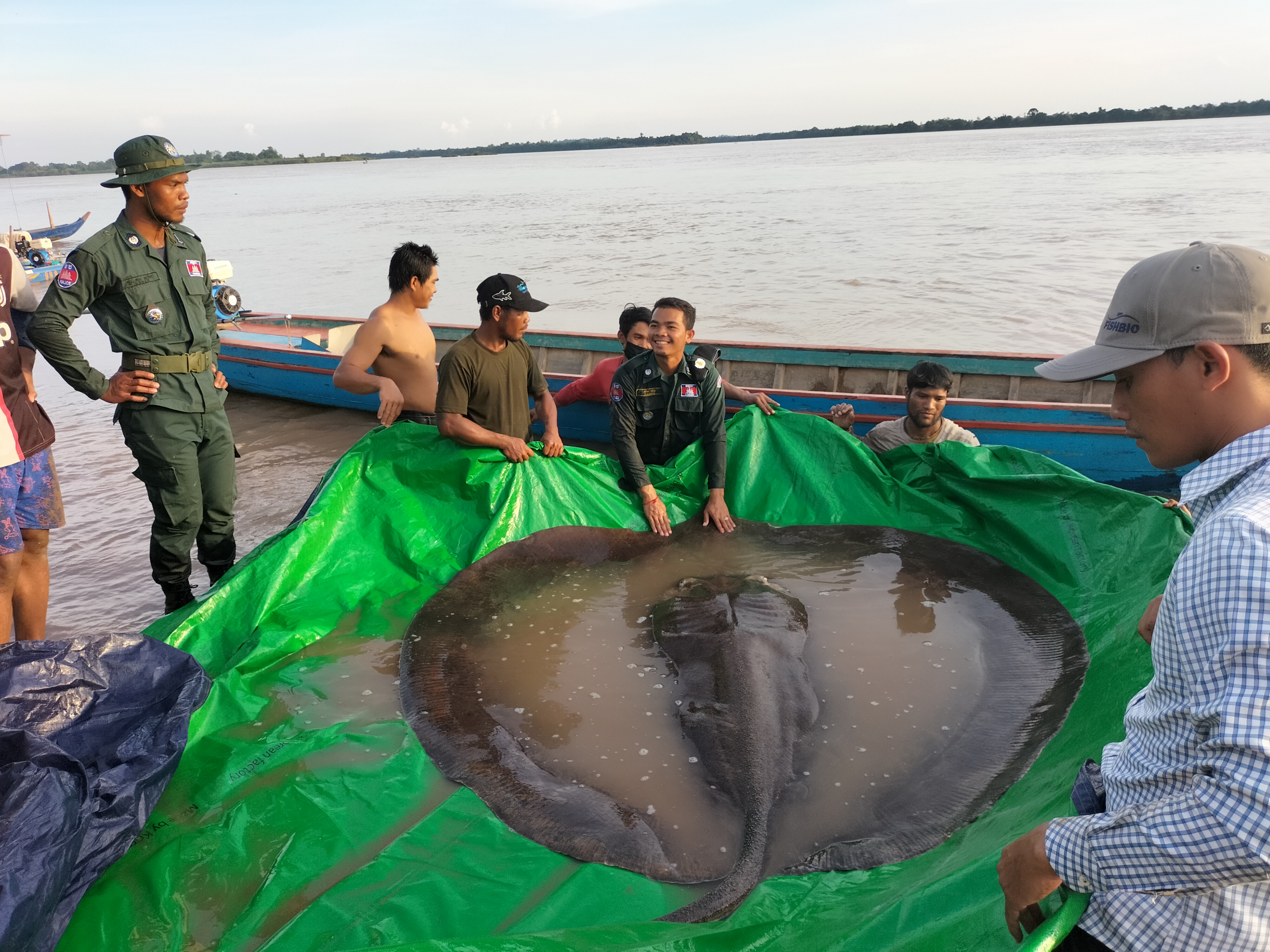 Deep within the murky waters of the Mekong River, giants lie concealed. Hard as it may seem, in this mysterious environment even an animal roughly the size and weight of a grand piano can be challenging to find! Despite its astounding size, the endangered giant freshwater stingray (Urogymnus pol­ylepis) is rarely observed and exceedingly challenging to study, and as a result, little is known about its behaviors or life cycle. But thanks to a network of local fishers and the quick action of an international team working with the Wonders of the Mekong project in Cambodia funded by USAID, scientists have encountered a rare opportunity to learn about this colossal denizen of the deep. On June 14, 2022, the team surgically implanted an acoustic tag into a 661-pound (300-kg) giant stingray in the Mekong River in Cambodia, which weighed in as the largest freshwater fish ever recorded. This tagging marks the first use of acoustic technology to study this species, and has the potential to shed light on mysteries of stingray migration and behavior thanks to a new acoustic receiver network that FISHBIO and Young Eco Ambassadors recently helped install in the Cambodian Mekong. 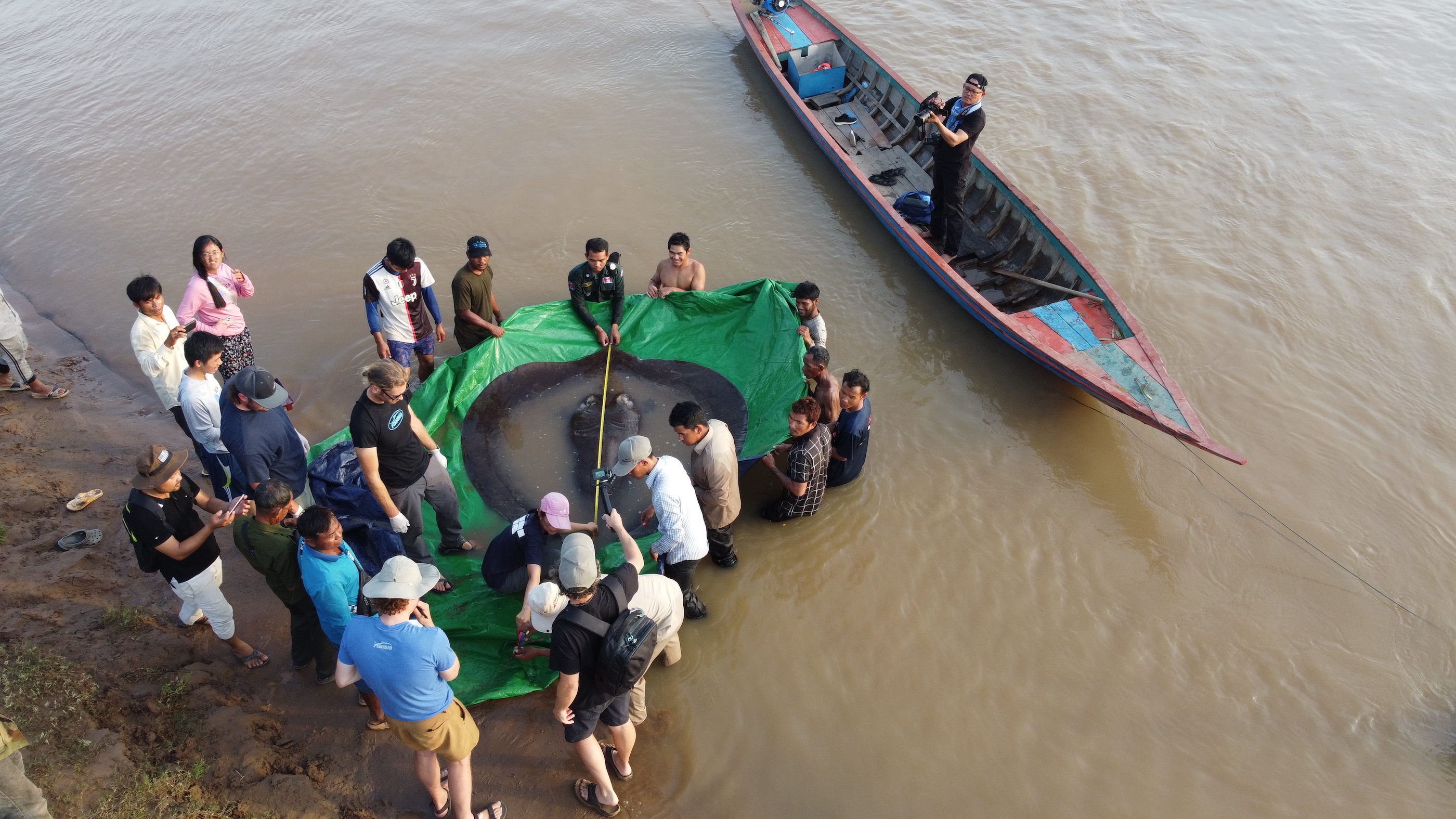 Working in the heat of the tropical sun, FISHBIO researchers joined collaborators from Young Eco Ambassadors (YEA) and the Inland Fisheries Research and Development Institute (IFReDI) of the Cambodian Fisheries Administration during an intensive two weeks in the field to install and activate the first acoustic receiver network in the Cambodian Mekong. This network will be used to monitor the movements of acoustically tagged fish to learn more about the migration of Mekong fish species throughout the watershed. Getting receivers up and running at the beginning of the wet season, which lasts from June to November, was critical for monitoring of tagged fish that are already being released further upstream in the Mekong River by the Mekong River Commission’s Joint Environmental Monitoring team in southern Lao PDR. While working their way downstream, the stars aligned for the acoustic network installation team when they received word that an exceptionally large giant stingray had been captured in one of their monitoring sites near Strung Treng, Cambodia. Acting quickly to ensure the safety and well-being of the ray, they coordinated with other members of the Wonders of the Mekong team and the Cambodian Fisheries Administration to assemble a tagging crew.

By working with local communities, Wonders of the Mekong scientists have built a network of local fishers in order to receive notifications of any giant stingrays that are caught during fishing. A total of three rays have been captured so far during the first six months of 2022, and Wonders of the Mekong teams have traveled to the sites to take measurements of each stingray’s weight and size, and to facilitate their release back into the river. All of these fish were enormous, but when the fishers called in their most recent catch, they made it clear that this one was bigger – much bigger. When the project team including FISHBIO scientists arrived, they were awestruck at the sheer scale of the stingray. This very large female weighed in at 300 kilograms and measured 2.2 meters wide by 4 meters long from tip of snout to tip of tail. Her bulk was sufficient to earn her the title of the largest freshwater fish on record, outweighing the previous record held by a 293-kg Mekong giant catfish (Pangasianodon gigas) captured in 2005. 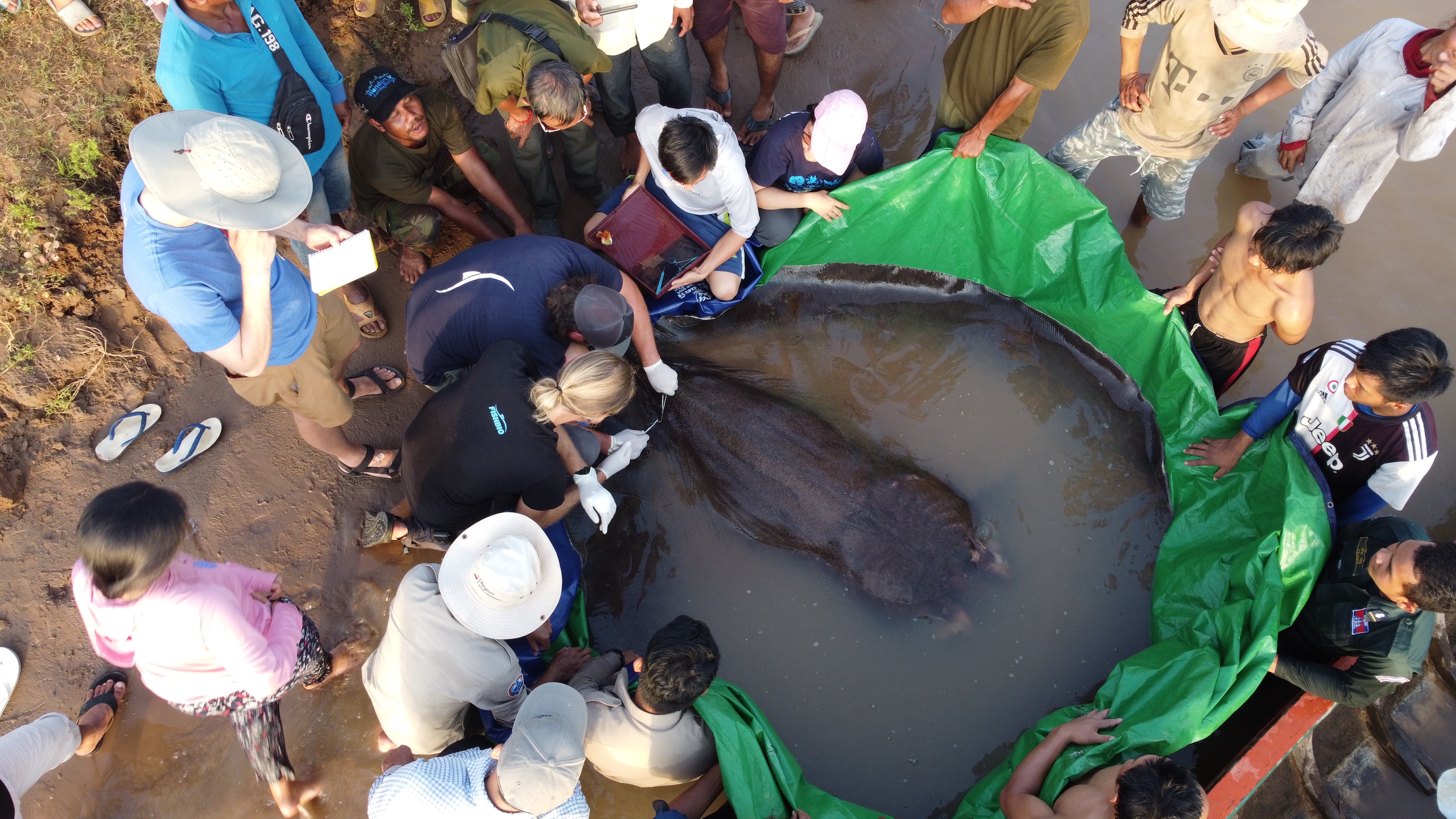 The team quickly secured the ray in a large tarp in the river and made a small surgical incision near the base of its tail, where they inserted a small acoustic tag. After stitching up the surgery site and cleaning it with disinfectant, the team released the ray back into the river. With one final spout of water from her spiracles, she quickly slipped beneath the water and out of sight. The tag she carries will emit a sound signal underwater, which will be picked up and recorded by the acoustic receivers that have been placed near the release site. If the stingray migrates along the river, it may also be detected by the numerous other receivers our team has strategically placed throughout the watershed. The tag will continue sending a signal for approximately one year, hopefully providing the first ever data on giant stingray movement in the Mekong River.

Many Mekong fish species undertake short or long-distance migrations as part of their life cycles to access important habitats such as floodplains, deep pools, and flooded forests. Understanding when and where fish migrate is important to ensure that key habitats remain connected so that fish can complete their life cycles to support healthy fisheries. As the Mekong River is progressively impacted by a burgeoning human population, the construction of hydropower dams, and the effects of climate change, it is becoming more urgent to understand the ecological needs of large and sensitive species like the giant stingray. The Wonders of the Mekong team will continue to implant numerous species of fish with acoustic tags at various locations throughout the watershed, and the data gathered on their movements will help open a window into the fish superhighway that lies hidden beneath the Mekong’s surface. We want to acknowledge that the tagging of this remarkable ray, as well as the entire acoustic telemetry project, would not be possible without the tireless assistance of local fishers in the villages along the Mekong’s banks, who depend on the river for their food and livelihood. Thanks to their efforts to support science, the world has the opportunity to learn more about the incredible of Mekong River, and hopefully advance its conservation.

Read more about this story at The New York Times, The Washington Post, National Geographic, CBS News and NBC News.